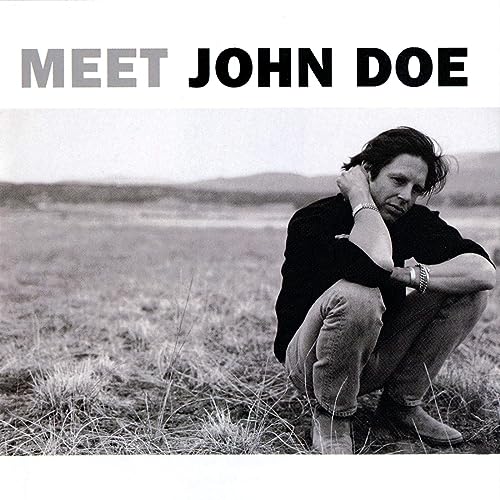 “Raw” and “honest” tend to be vastly overused words when it comes to rock music of any stripe, but they may just apply to John Doe’s solo debut on the DGC label (spun off from Geffen). In some respects, this was always something of a trademark with Doe’s former band, X, but there was always the whirlwind of Exene Cervenka carrying most of the weight of the vocals, and the frontline immediate image, while Doe was always just slightly back in the shadows, seemingly as anonymous as his name. Now he’s out front, and the impact is quite immediate — Meet John Doe roars into action with a blaze of Texas-styled rhythm guitar and a gorgeously weathered voice that’s a sheer delight to listen to, even though the thrust of the song is, essentially, love and anger: “Let’s Be Mad.” There’s a quite deliberate irony in the song and in the performance, and one can sometimes hear an undercurrent of bitter laughter in it all. The band backing Doe up is unpretentious, to say the least — two guitarists, bass, and drums, with visits from piano and organ here and there, and scatterings of backing vocals. There’s no effort to deliberately go after a certain style, though; this all has the feeling of falling together naturally, the way the best albums often do. Get a bunch of guys into the studio and let the music find its own direction. Doe is to be commended for this — he could as easily have utterly cloned X, which would have provided him with a solid holding pattern but nothing more. There’s a sadness pervading the selection of songs, though, but it’s not depressing; instead, it’s more like the earmark of some of the best country material, and the album’s theme of personal expression could as easily been seen as an act of personal therapy — a cleansing of the system. The final track, “My Offering,” admits to a universal truth as the narrator, exhausted in an Atlanta hotel room, admits how much turns out badly, sees how people can be hurtful, comes to understand that he can do nothing to stop it — and yet still has something to offer to someone, despite it all. Many of the lyrics here verge on raw poetry and carry a breathtaking force, partly because of the way they’re delivered. Doe’s worn voice is one of his greatest assets; the expansive sound of his music fits right in with that. All told, an excellent solo debut.