Joe Louis Walker – Journeys To The Heart Of The Blues (2018)

Posted by Green on October 26, 2018
in blues
as Joe Louis Walker 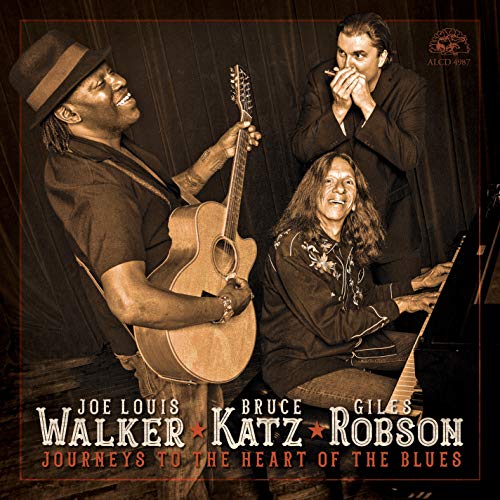 Alligator Records has acquired the rights to release Journeys To The Heart Of The Blues, a dynamic new acoustic album from three of the blues’ best players. Together, Grammy-winning guitarist, vocalist and Blues Hall Of Famer Joe Louis Walker, virtuoso pianist Bruce Katz and next-generation British harmonica ace and bandleader Giles Robson take listeners on a musical tour of beautifully played, soulfully sung traditional blues. The album features a carefully chosen collection of eleven stripped-down, unadulterated rare and classic blues and one newly written instrumental performed by absolute masters of the form. Alligator Records will release the album throughout North America, Australia, New Zealand and Japan. Munich Records, a division of V2 Records Benelux, will release it in all other territories. The official street date, set for late autumn, will be announced soon.

The album was conceived in December of 2016 when Joe Louis Walker first met and jammed with Giles Robson at a festival in the Netherlands. Robson imagined recording an acoustic blues album with Walker. Walker quickly agreed, and suggested adding famed piano player Bruce Katz to the mix. The result is Journeys To The Heart Of The Blues.

Produced by Walker, Katz and Robson and recorded at NRS Studio in Woodstock, New York during a sub-zero stretch of weather in January of 2018, Journeys To The Heart Of The Blues captures three blues giants reinterpreting obscure and classic songs. The trio digs deep, playing with gimmick-free raw energy on songs by blues masters including Sonny Boy Williamson, Jazz Gillum, Blind Willie McTell, Smiley Lewis, Papa Lightfoot and Big Maceo. The songs may be old, but the recordings are fresh and vibrant. Walker’s vocals and guitar have never sounded more soulful. Katz’s virtuoso piano playing adds texture and depth, while Robson’s har monica playing fuels the music to even greater heights. According to Robson, “Journeys To The Heart Of The Blues celebrates the dynamics, grooves, lyrics and feeling of pure, traditional blues. It’s blues played intimately and at a low volume and with the wonderful space that is created when drums and bass are taken out of the equation.”