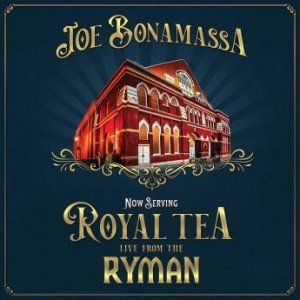 Last year when COVID-19 put the live touring industry on hold, guitar hero Joe Bonamassa did something unprecedented for his fans – he put together a one-night-only show at the iconic Ryman Auditorium in Nashville, TN to be livestreamed for fans everywhere. That night he united people across 44 countries worldwide for a phenomenal live music presentation of his brand-new album “Royal Tea” before it was even released. The stellar performance includes 12 incredible live tracks, featuring the best from his latest studio release Royal Tea, Joe’s 24th #1 record on the Billboard Blues chart, which was recorded at Abbey Road Studios in London. It also includes 3 electrifying tracks from his 20th anniversary album A New Day Now. Get your serving and relive the excitement time and time again with this once-in-a-lifetime release from one of the most celebrated Blues Rock entertainers!

Tracks
1 When One Door Opens
2 Royal Tea
3 High Class Girl
4 Lookout Man!
5 Why Does It Take So Long To Say Goodbye
6 A Conversation With Alice
7 I Didn’t Think She Would Do It
8 Beyond The Silence
9 Lonely Boy
10 Cradle Rock
11 Walk In My Shadow
12 A New Day Yesterday / Starship Trooper – Wurm