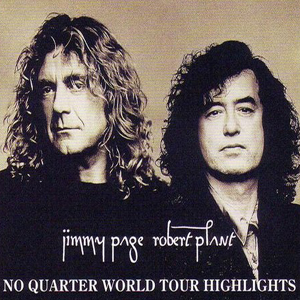 Jimmy Page and Robert Plant shocked fans when they reunited for MTV’s Unledded special in October 1994 — and sent them into a state of bliss when they decided to take their renewed partnership on the road for a lengthy world tour, starting Feb. 26, 1995, in Pensacola, Fla.

As they’d made clear by dissolving the band after drummer John Bonham’s death in 1980, Page and Plant weren’t interested in suggesting a Led Zeppelin reunion, and they drew a further line between their new project and the past by neglecting to invite former Zep bassist John Paul Jones. Still, for those who’d been hoping for updated yet still recognizable takes on Zeppelin classics, the 1995 tour’s configuration — featuring a six-piece rock band, 29 British classical string players and 11 Egyptian folk musicians — still had to come as something of a surprise.

“I suppose we were trying to reinvent our musical personality,” explained Plant during a press conference before the tour launched. “Jimmy and I have always had this leaning to the East. We went to India in 1971, you know, and recorded an orchestra in Bombay. There’s a very good bootleg out in Japan of that recording, highly recommended. Then in 1973 we went to Morocco, and I’ve been back there a lot. I’m just a little bit Moroccan!”

While certainly not without precedent in the Zeppelin catalog — or Plant’s own solo outings — the Eastern lean of the Page & Plant project also represented a way for the duo to carry the partnership forward without being suffocated under the baggage of their old band’s tremendous legacy. And although a few of the longtime faithful may have cringed at the notion that the whole thing got started thanks to a phone call from MTV, both men took pains to point out that there was absolutely nothing cynical about their reunion.

“I’ve been looking forward to working with Robert for so long, and have been looking in that interim period for someone I could have the same rapport with as I had with Robert,” Page admitted to Mojo. “And it’s certainly come back.”