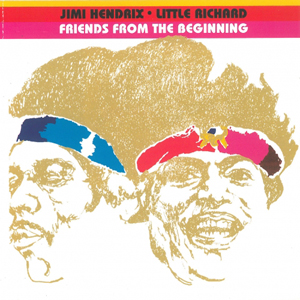 This album was a great surprise and overall pleasure back in 1972: following a disappointing (2nd Reprise LR effort) called KING OF ROCK AND ROLL, which was essentially a semi-throw away for The King, with the notable exceptions of amazing *vocals* on hits by the Stones, Creedence, and Motown artists. This ’72 release on a small label, Ala, featured long, stereo versions of tracks originally released Vee jay – particularly important were the slow blues from fats Domino, “Goin’ Home Tomorrow” (aka “Goin’ Home”), featuring Don and Dewey, with Don on electric violin!; and “Lawdy, Miss Clawdy”, the best cover” ofthis legendary number, originated by the man who urged Little Richard to contact his label, Specialty Records.

These two tunes, along with “Hound Dog”, “Whole Lotta Shakin’ Goin’ On”, “Money Honey”, and “Goodnight, Irene”, featured Don and Dewey, who often gigged with a guy mnamed Maurice James, who also played fill-in Upsetter for Richard’s band! Jimi sname may not be found in the company files for the June 30, 1964 session in Los Angeles, but the “evidence” is on the side of…yes, Jimi’s here. And he can be *heard*! (Listen to the high notes on guitar on “Tomorrow”).

The reamining tracks were, strangely, recently recorded tracks for Reprise records, which came out in 2005, under different songtitles, and in two cases, markedly different mixes (on instrumentals), and in another take on Hank Williams’ “Why Don’t You Love Me?”.

Looking back, Richard and co. would have been alot better off loping off some curious things herein and substituting three tracks which even Hendrix “experts” say involved JH, “I Don’t Know What You’ve Got (But It’s Got Me)” – two versions, and “Dancing All Around The World” (pressed on a demo under the title of “Dance A Go Go”). These recordings are phenomenal. Ce’st la vie.~ Phil Silverman