Posted by Green on March 20, 2020
in oldies, rock, rockabilly
as Jack Scott 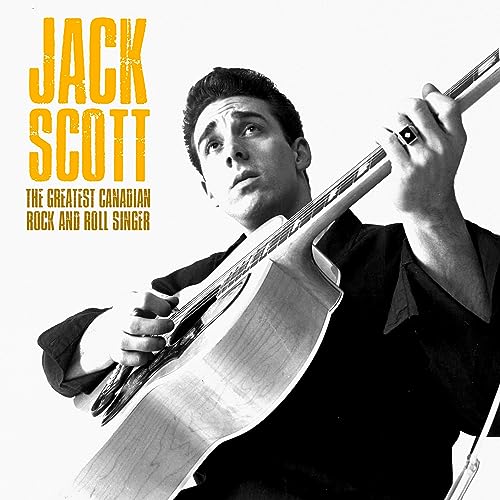 Jack Scott sounded tough, like someone you wouldn’t want to meet in a dark alley unless he had a guitar in his hands. When he growled “The Way I Walk,” wise men (and women) stepped aside. Despite his snarling rockabilly attitude, Scott hailed from Windsor, Ontario, Canada, and grew up across the river, near Detroit, developing a love for hillbilly music along the way. His first sides for ABC/Paramount in 1957 exhibited a profound country-rock synthesis, and after moving to the Carlton label, Scott hit the charts the next year with the tremulous ballad “My True Love,” backed by his vocal group, the Chantones. Flip it over, however, and you have the hauling rocker “Leroy,” all about some wacked-out tough guy who’s content to remain behind the bars of his local jail. Scott’s pronounced emphasis on acoustic guitar distinguishes atmospheric rockers like “Goodbye Baby,” “Go Wild Little Sadie,” “Midgie,” and “Geraldine.” But his principal pop success came with tears-in-your-beer country-based ballads “What in the World’s Come Over You” and “Burning Bridges” were massive smashes on Top Rank in 1960, and he recorded an entire album’s worth of Hank Williams covers for the firm the same year.