Posted by Green on February 12, 2020
in americana, rock
as Jack Marion and the Pearl Snap Prophets 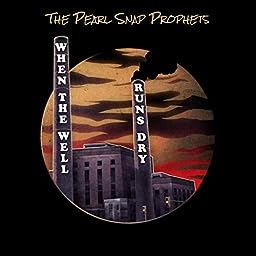 ‘When the Well Runs dry’ is the debut album by Jack Marion and the Pearl Snap Prophets. They’re probably new to you (and me) but before we go into detail about them and the record let’s get three things clear: 1. This is a damn fine record. 2. It is not a concept record. 3. It is not a country record. We will get back to these in a moment but first a bit of bio. They were formed in 2017 in the town of Boon, nestled away in the mountains of North Carolina, by chief songwriter Jack Marion (vocals/guitar) along with college buddies and fellow Music Business Majors Chandler Bell (bass), and Marcus Clonts (drums). Since forming, they have added Owen Myers (Lead Guitar) and Matt Guard (Keyboard) and released an EP ‘The Devil and Me’ in 2018.

Many of us will be familiar with their home territory of North Carolina as a breeding ground for Appalachian storytelling in the folk and bluegrass traditions; take Doc Watson, Earl Scruggs and Old Crow Medicine Show as a pretty good trio for starters. These traditions were evident on the Pearl Snap Prophets’ enjoyable but somewhat pedestrian first EP. ‘When the Well Runs Dry’ has upped the ante in any way that matters – energy and songwriting in particular. In terms of style they have strengthened their sound with an unruly, amplified dose of rock n roll salts.

Eighteen months of hard slog playing show after show in clubs and bars across NC has beefed them up no end. This commitment to the time honoured process of honing their craft and building a following shows they are in touch with the virtues and (hopefully) rewards of the hardscrabble life they sing about and has given ‘When the Well Runs Dry’ a real earthy resonance that draws you in to its radio-friendly heart.

There may be a strong and creative gang behind the LP (including ‘joint producers’ Cory Halterman, Jacob Davis Martin, and Chris McGinnis) but there is no denying that Marion is the creative driving force here. His songwriting provides a robust vision of how he sees the world, so much so that there has been talk of this being a concept album. Don’t worry, it isn’t. Whilst there are evident themes recurring throughout: the nature of relationships and family, the dreams of everyday small town life and the uncertainty of an insecure future, these are not formed into a coherent narrative or even placed in a single consistent context. What Marion does, is write about the world as he has come to know it. He lays bare the frustrations, difficulties and pressures of blue collar rural existence in 21st century America, articulating his feelings in a way that resonates with all of us, even if we are not familiar with the context from which they are delivered. Marion is communicating about what is on his mind in the best way he knows how and that is something that pretty much every great songwriter has done through the ages.