Posted by Green on November 4, 2020
in blues, psychedelic, rock
as Eric Burdon & The Animals 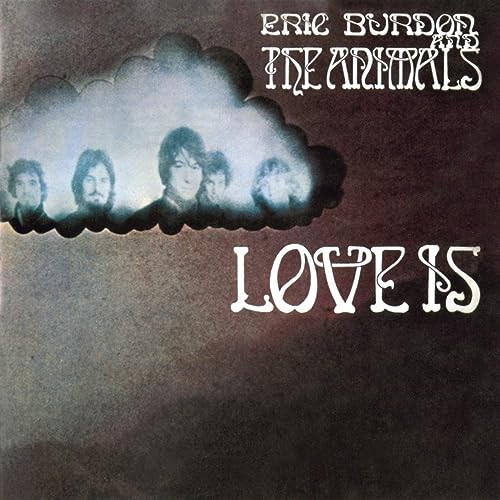 It’s an eyebrow-raising experience to encounter the cover of “River Deep, Mountain High” that opens the Animals 1968 album, Love Is. Clocking in at nearly seven and a half minutes, it’s the weirdest version of the song ever cut. Self-produced by the band, it juxtaposes vocalist and bandleader Eric Burdon’s staggering abilities as a rhythm & blues singer with few peers with then-modern-day psychedelia. The Phil Spector, Ellie Greenwich, Jeff Barry-penned vehicle for Ike & Tina Turner was never envisioned like this. There are moments of pure greatness in the track, a rough, garage-hewn rock and R&B foundation underscored by Burdon’s blues wail is, unfortunately, completely messed over by the sound effects and his insistence on yelling “Tina, Tina, Tina…” ad nauseam in the bridge. And this is just the beginning. This version of the Animals contained enough serious players that they should have known better: Burdon, keyboardist Zoot Money, drummer Barry Jenkins, bassist John Wieder, and a young guitarist who’d been booted from Soft Machine after a very brief period named Andy Summers. For those who found charm and even inspiration in the Twain Shall Meet and Winds of Change both recorded in San Francisco Love Is may hold some sort of place in the heart. For those who looked back to the Animals catalog that included such dynamic albums as Animalism and Animalization as well as a slew of killer four-track EPs, this must have seemed like the bitter end. On the other hand, this trainwreck of an album has some interesting moments mainly for hearing how hard they tried to imitate other acts who were successful while at the same time trying to forge a new identity from the ruins of who they once were as a band whose day had come and gone. The utterly awful reading here of “Ring of Fire” is almost laughable. Other covers include a rave-up cum psychedelia version of Sly Stone’s “I’m an Animal,” Traffic’s “Coloured Rain,” and the Bee Gees “To Love Somebody.” The latter which has to be heard to be believed — begins with Summers playing Chuck Berry licks as an intro before it slows down into a completely over-the-top Don Covay-styled soul shot with Burdon underscored by a female backing chorus which counters to push him into the stratosphere. Despite its cheesy organ sound, it has enough power drumming, crunchy guitar, and a neat little piano break by Money to make it work. It’s easily the best thing here even if it is absolutely mental. Burdon had heard ex-bandmate Chas Chandler’s young guitar protégé Jimi Hendrix’s “Third Stone from the Sun” from the Jimi Hendrix Experience’s debut album as well. In fact, he enlisted Money’s buddy, guitarist Steve Hammond (of Johnny Almond’s Music Machine) to come up with a long-form psychedelic suite that evoked it and some of Pink Floyd’s weirder experiments at that time. The end result, “Gemini,” is hysterically funny now, and must have just seemed to be ecstatically drug-addled tomfoolery at the time. The closer, “The Madman (Running Through The Fields),” by Summers and Money would have been a killer single if they’d edited the acid-fried middle section out of it. As it stands, Love Is was a mess from a band who, once great, had completely lost its way and was on its last legs.