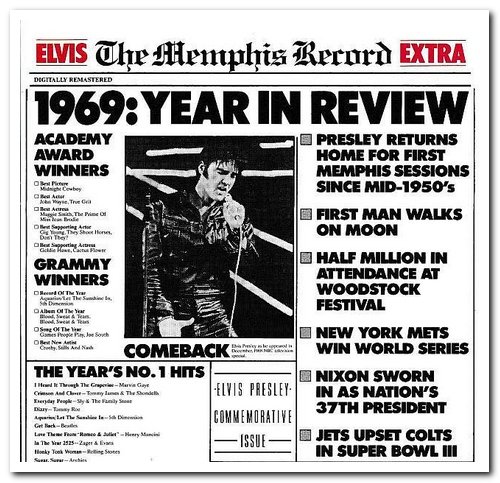 The Memphis Record was RCA’s first serious effort to assemble the highlights of what is usually called Elvis Presley’s comeback, but which, arguably, could be considered the best album sessions of his career. For the first time since the middle to late ’50s, he went into the studio without “Colonel” Tom Parker, his manager, in control of the repertoire, and cut songs because they were good and he liked them, without regard for whether Elvis’ business half had an interest in the publishing. The result was one of the greatest white R&B albums ever done, filled from beginning to end with some of the best work of Elvis’ career: “Suspicious Minds,” “Kentucky Rain,” and “In the Ghetto” became hit singles and speak for themselves, but “Any Day Now,” “Stranger in My Home Town,” “Long Black Limousine,” and “Only the Strong Survive,” among the other cuts here, are the equal of anything he ever recorded in musical excellence, excitement, and intensity. This material, some of which was originally divided up between two separate LPs, From Elvis in Memphis and Back In Memphis, has since been recompiled yet again on Suspicious Minds [1999], and that is the ultimate compilation of these songs, but this one is more than adequate for more casual fans who want a revelation or two (or three) in their listening.