Posted by Green on February 28, 2020
in rock
as Elliott Sharp’s Terraplane 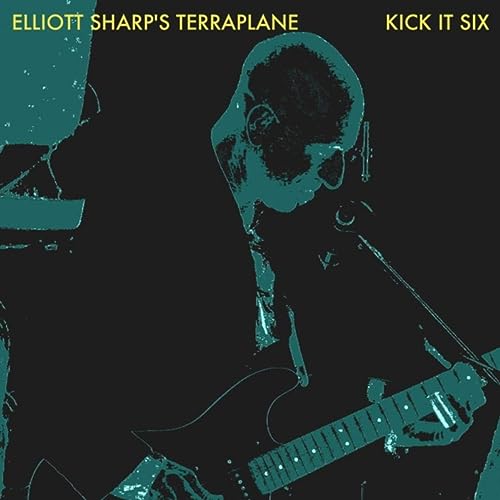 Kick It Six is a guitar album. While this might not be surprising given that Terraplane is Elliott Sharp’s contemporary blues band, what might be unexpected is the range of guitar sounds that may be heard here, all in the service of deep emotional commitment to the music. Known for pushing the limits of guitar with an approach that encompasses both a unique vision and ferocious technique, in Kick It Six, E# puts into practice his adage: “If you keep one foot in the future and one in the past, it puts your ass right in the present”. “Kick It Six” takes its’ title from Blind Willie McTell’s exhortations to himself when featuring his own guitar solos. It’s an apt turn for putting the guitar in the spotlight. The track “Zebedee” is a tribute to another guitar legend, Earl Zebedee Hooker, a Chicago blues session guitarist of great virtuosity whose licks enlivened the music of Muddy Waters and so many more (not to mention being stolen by Led Zeppelin!) Sharp also tips his hat to many other greats, whether explicitly or in passing: both Albert and BB King, Jimi Hendrix, Hubert Sumlin, Albert Collins, Robert Nighthawk, Sonny Sharrock, and John McLaughlin. The grooves on “Kick It Six” range from traditional shuffles to glitch-processed hyperfunk but the music is always rooted in the blues.