Posted by Green on April 30, 2018
in celtic, folk
as Duncan Chisholm 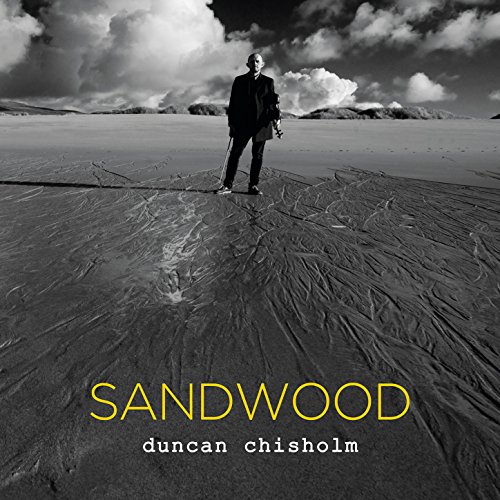 This latest studio album from one of Scotland’s most admired fiddle players and composers draws its inspiration from a single location in Sutherland, the furthest northwest part of mainland Scotland. Sandwood Bay is remote, at least by UK standards. Most visitors don’t even venture down the dead-end road to the fishing harbour of Kinlochbervie, much less the extra 3 miles to where the tarmac peters out. There to be faced with an hour and a half hike, picking a path between the bogs and the sandstone hills, traversing the low hummocks of gneiss, before reaching the bay. But Duncan Chisholm did, numerous times, describing it as “the finest and least accessible beach in Scotland”. Over the two years it took for him to produce this album, experiencing the bay in all seasons and weathers, the place provided endless inspiration. Inspiration to compose magnificently atmospheric pieces but also to enthuse ten of Scotland’s finest musicians, ensuring their participation, some just in the recording, others also contributing to the compositions.

The album opens with The Pilgrimage, the word Duncan uses to describe his first visit to Sandwood. This short track begins with a few, important, words, spoken by Donald ‘Dall” MacKay overtones that swell and fall. According to Duncan, Dall possesses the finest of North Sutherland accents. “Out here there is no time, time is our imagination, past, present and future”. A sense of time but also its absence, a vital element of the inspiration that Sandwood provided. Duncan’s fiddle then adds a short, repeating phrase complementing the background tones. This slow, quiet passage is brought to an end by the thump of a bass, giving notice that this album will have distinctly non-traditional elements to it. The bass is contributed by Ross Hamilton who, in addition to adding electric guitar, co-produced the album with Duncan.