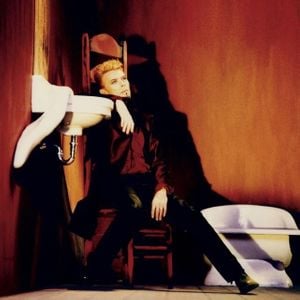 The late, great David Bowie would have been 73 years old today. Those in charge of managing his legacy are commemorating the occasion with the announcement of two new releases constituting some of the only previously unreleased music to emerge since his death three years ago.

It’s a little confusing, so bear with me. First, there’s an EP called Is It Any Wonder? featuring rare and previously unreleased tracks. That one is trickling out one song per week, starting with “The Man Who Sold The World (ChangesNowBowie Version).” It’s taken from a radio session that comprises the other new Bowie release, a limited edition nine-track LP and CD called ChangesNowBowie, which is coming on Record Store Day. The Is It Any Wonder? artwork is above, and the ChangesNowBowie artwork is right here:
Bowie recorded the mostly acoustic ChangesNowBowie in November 1996 during rehearsals for his 50th birthday concert at Madison Square Garden, accompanied by Gail Ann Dorsey (bass, vocals), Reeves Gabrels (guitars) and Mark Plati (keyboards and programming). The BBC broadcast the session on that birthday, Jan. 8, 1997, but it’s never been officially released before now. The dating means “The Man Who Sold The World (ChangesNowBowie Version)” was cut just a couple years after Nirvana famously covered the song at their own legendary MTV Unplugged concert.

We “The Man Who Sold The World (ChangesNowBowie Version)” appears on both Is It Any Wonder? and ChangesNowBowie. It’s out today as a standalone digital single marking not only Bowie’s birthday but also the 50th anniversary of the original studio version’s recording, way back in the earliest years of Bowie’s career. The rest of the Is It Any Wonder? tracks will trickle out weekly continuing on 1/17, and we remain eager to learn what they are.