Posted by Green on July 9, 2021
in folk
as Daniel Wylie's Cosmic Rough Riders 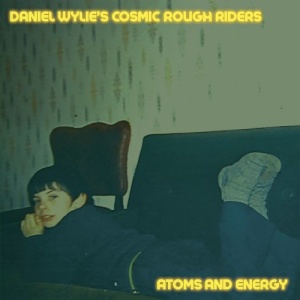 Scotland is generally considered by most intelligent folk as the second-best place on earth to produce sun-kissed jangle rock and pop after California, and most of them would point to Teenage Fanclub to prove their point. Many others might however suggest that Glasgow’s Daniel Wylie has an equal claim to be Scotland’s (indeed, the UK’s) premier exponent of Byrds/Neil Young/CSN&Y influenced sounds, going back to his debut with the Cosmic Rough Riders in the late 90’s. ‘Atoms And Energy’ cements this view with Wylie delivering a solid set of bittersweet songs replete with harmonies and flurries of guitars paying tribute to the heyday of the sunshine state while remaining attuned to this modern world.

According to Wylie, the album was originally supposed to be a back to roots acoustic affair but having gone into Glasgow’s La Chunky studios with co-producer Johnny Smillie, the songs started to grow arms and legs with Neil Sturgeon and Stu Kidd adding their parts. Then covid hit and recording stopped. When they could return to work, Smillie, in the studio, worked out arrangements and sent them to Wylie and together they finally assembled the finished album. For such a patchwork background, it has to be said that the album is supremely well-tailored and at times, quite intricate. Take, for example, the elaborate Brian Wilson/ Curt Boettcher influenced vocal harmony section which punctuates the otherwise baleful ‘The Bruises And The Blood’ which finds Wylie railing against domestic violence. It’s a sunny song with a dark heart and several songs here persevere in a similar manner.