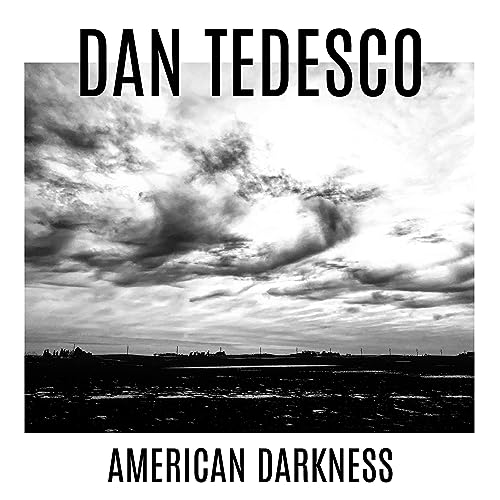 Dan Tedesco’s new album American Darkness takes a look inside Dan’s mindset over the past couple years. Welcoming a new baby, weighing what it means to be a parent in the current political climate, and the turmoil over the past couple years play into the overall vibe but doesn’t dominate the album’s overall theme. Dan spends a lot of the album reflecting on the bad that he sees with a hopefulness that there’s a change on the horizon.

Recorded at Shangri-la Productions in Lexington, Ky, Dan brought in a number of great musicians including Lee Carroll, Tom Hnatow, Justin Craig, Blake Cox, Trip Bratton, and Robby Cosenza. The album was produced by Dan and studio owner Duane Lundy, who has worked with Grammy winners Sturgill Simpson and Flor De Toloache as well as legends like Ringo Starr. The mix of Dan’s Iowa roots, and the Kentucky influence of Shangri-la and the players, bring to life subtle elements in each song and gives the album a completely Americana feel.

The title track “American Darkness” is warning to his newborn to “not get lost in the American darkness,” and that while things can be ugly, to dream big and take his love for her out into the world. “Backstage” is a glimpse at that walk through the backstage and the less than glamorous side of the business. It’s one of my favorites of the album along with “I Took A Ride Last Night” and “Who Am I To Say”.

“All I Wanted Was a Friend” gives a cool laid back Eagles vibe while “Lost In The Shuffle” takes an introspective look at how easy it is to get bogged down in the day to day. “The Wolves Are Running Wild Tonight” has some heavy lyrics that Dan must have been pulled from the headlines, and a story line that comes from his personal experience but, could really be all of our story. It’s an extremely personal album and I’m looking forward to Dan building off American Darkness and see what the mirror he looks into for inspiration shows him in the years to come.