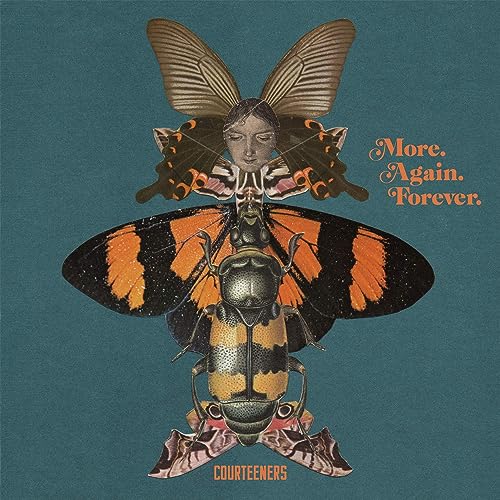 Album six starts with the impressively muscular riffs of ‘Heart Attack’, undone slightly by a rare instance of clunky lyricism. However, what is commendable is that Courteeners not only refuse to rest on their laurels with this record, but cast many of them aside altogether. There are only vague traces of the tunes they made their name with, with the band actively in search of more adventurous styles and motifs. ‘Heavy Jacket’, which treads a fine line between repetitive and jarring with a title that only recurs the 40 times, is still an admirable gamble with an addictive bridge.

Reassuringly most of the risks pay off, and the infectious title track is one of many welcome leftward turns. There are inspired spoken word segments from lead vocalist Liam Fray, who can be found in confident and honest form, and catchy bass lines which instantly lodge in the head of the listener. Beneath the winning, arena-ready choruses, ‘Previous Parties’ and ‘The Joy of Missing Out’ take swipes at a shallow, overly nostalgic society. The disco vibes of the former make for an enjoyable listen, while the latter experiments with structure in compelling style. A lot of the more upbeat numbers have been written with a live environment in mind, but for an act selling out Manchester’s biggest parks at the drop of a hat this is logical, and the tunes stand up in recorded form.

For a group best known for alternative classics, the best moments here are, surprisingly, the most introspective. ‘Better Man’ is a slice of joyous psychedelic pop, but also basks in the self-reflection that dominates the album. Arguably the centrepiece here, the stunning ‘Hanging Off Your Cloud’ stands out as the best ballad that Fray has ever written. Starting with a lush ‘Dry Your Eyes’-style string section, the song is a stadium-ready triumph in its pining address to an ex-lover. ‘One Day At A Time’ and ‘Take It On The Chin’ take contrasting perspectives on mental health. Fitting closer ‘Is Heaven Even Worth It?’ dials up the self-deprecation, riffing on “self-improving”, lives lived through Instagram, and feeling empty despite the veneer of having everything.

This is all reflective of a band who are more mature and musically accomplished than ever, closer to the likes of Matt Berninger and Guy Garvey in inspiration than Liam Gallagher. Courteeners have created one of their most endearing, earnest works yet in More. Again. Forever. Music for the masses, this record will no doubt leave venues and hearts full for the foreseeable future.