Posted by Green on March 21, 2020
in Uncategorized
as Connie Francis & Hank Williams, Jr. 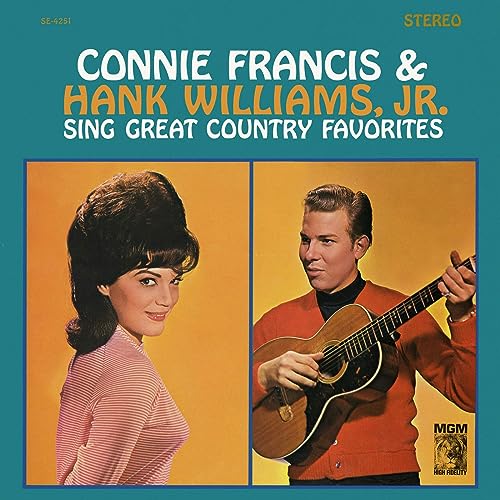 The pairing of Hank Williams, Jr. and Connie Francis seems like a coming together of equals now that Williams has become a big star, but at the time the duo recorded Sing Great Country Favorites, Williams was a 15-year-old boy at the beginning of his recording career and Francis was a very well-established artist. Francis, ten years Williams’ senior, was given the task of gazing adoringly at Williams for the photo session, which must have been an awkward shoot. Thankfully, the age disparity isn’t reflected in the music, as Williams’ mature-sounding vocals take the lead and Francis sings mostly harmonies. The songs are a collection of country standards and recent hits such as “Wolverton Mountain,” “Walk on By,” and “Send Me the Pillow That You Dream On.” A few, including “Bye Bye Love” and “Singing the Blues,” are new recordings of songs that Francis had already tackled as a solo vocalist a few years earlier. MGM’s goal in pairing the two singers may have been to prop up Francis’ career and to boost Williams’, but the effort was unsuccessful from a commercial standpoint. In retrospect, the album seems even more unusual than it did at the time, since Williams transformed into the wild Bocephus and Francis is sometimes described as the female Pat Boone. The Bear Family reissue appends two alternate takes, including a more spirited rendition of “Mule Skinner Blues” that rivals the album take.