Posted by Green on March 13, 2019
in bluegrass, country
as Chicken Wire Empire 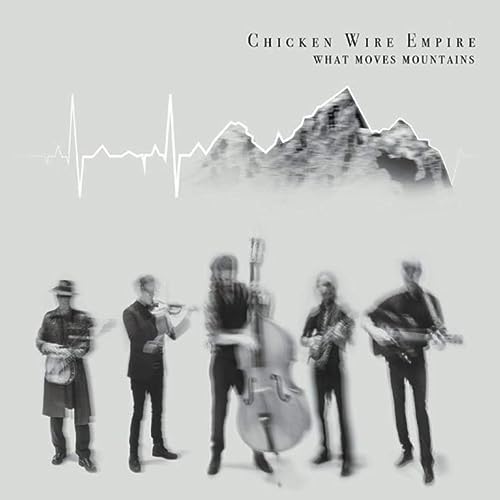 Chicken Wire Empire has done a lot in its first five years as a band. Since being formed by a pair of jam band enthusiasts, the contemporary Milwaukee bluegrass outfit has grown to five members. Along the way, the band released its self-titled debut album, was the subject of an hour-long film, shared the stage with the likes of Yonder Mountain String Band and The Big Wu, played a variety of local and national festivals, and has become a fixture at shows in and around Milwaukee.

Though the band—which also has current and former members of Buffalo Gospel and Calamity Janes & The Fratney Street Band in its ranks—has little left to prove, Chicken Wire Empire won’t waste any time before making good on their new year’s resolution in 2019 when they release their long-awaited follow-up, What Moves Mountains, on January 1. Over the course of 11 songs and close to 49 minutes, the local bluegrass mainstay manages to traverse new territory, give exciting new life to a few songs from other artists, and mix impressive musicianship and compelling narratives to forge a release that was well worth the four-plus-year wait.

The opening mandolin plucks and fiddle cries in “Still In Love With You” kicks the album into motion in energetic fashion before giving way to “Rope,” a tale about a protagonist in need of a hand that squeezes solos and admirable strings into the framework of the story. Though the storytelling angle is also effectively employed in songs like the moonshine-running “Maker” and violent ballad “Shotguns & Doublewides,” Chicken Wire Empire chooses to let the music do most of the talking in What Moves Mountains. Fortunately, this quintet of experienced players can spin quite a yarn with their instruments.

Between intriguing lyrics, rich harmonies, and excellent musicianship, Chicken Wire Empire climbs to even higher ground in its sophomore release. The wonderful covers of Tom Petty’s “Wildflowers,” Mark A. Graham’s “Lumpy Beanpole & Dirt,” and an instrumental take on Bill Monroe’s “Old Dangerfield” only sweeten the deal.