Posted by Green on September 21, 2021
in country
as Charley Crockett 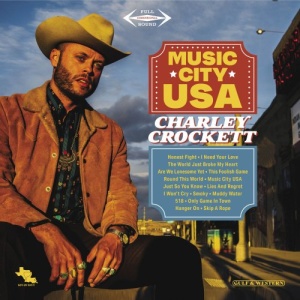 ‘Music City USA’ is Charlie Crockett’s 10th album in just six years – and it’s a double one at that – but with the life the 37-year-old Texan has had, it’s of little surprise that he has no shortage of stories to tell. He battled childhood poverty growing up in Dallas, freestyling on the streets of New Orleans as a teenager before busking in New York. Such a transient existence led him to crime, working harvesting marijuana fields in the northwest before he was subsequently twice convicted of a felony.

Music has very much been Crockett’s saviour, allowing him a path away from crime – but it’s enabled him to draw on his past experiences too, just as does on the opening track ‘Honest Fight’. “What have I done ‘cept stand up for myself / When I didn’t have anybody else / What have I seen of an honest fight / I’m just doing what I think is right,” he laments on the chorus, trying to put naysayers in his shoes and show them he’s always been a man simply doing the best he could with the hand he’s been dealt.

The sound throughout the album is a pure old school country delight, with Crockett crooning smoothly with the best of them, often to a liltingly retro beat. Songs like ‘I Need Your Love’ and ‘The World Just Broke My Heart’ could sit proudly alongside any of the great soul-packed country songs from the 50s and 60s.