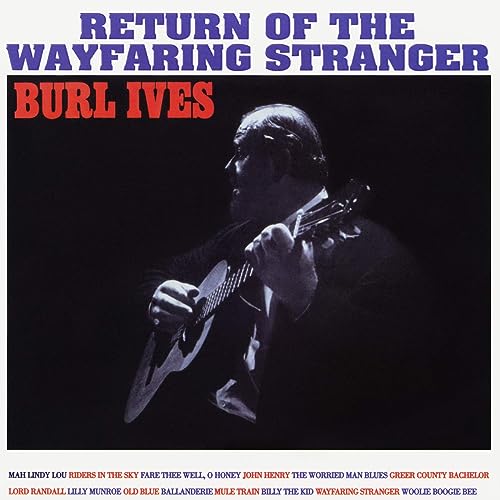 This follow-up to The Wayfaring Stranger is, if anything, livelier and more bracing than its predecessor, released five years earlier. In contrast to The Wayfaring Stranger, which was aimed at younger folk listeners (especially children) and purists, Return of the Wayfaring Stranger came out in the midst of the folk revival; in that regard, it seems a little archaic for a 1960 release. Burl Ives didn’t change his sound which remained soft and lyrical so much as extend his repertoire to encompass two contemporary hits inspired by folk themes, “Riders in the Sky” and “Mule Train,” the latter done with elements that are more familiar from the song “Fast Freight,” and also intersect with the Kingston Trio on “The Worried Man Blues.” The singing is beautifully intoned in the restrained manner of the previous generation of performers, a fact that appealed to the purists who Ives still counted in his audience, and to parents looking for material that was safe for their children. It was records like this, as much as his classic Decca sides, that kept his reputation as a folksinger for children alive into the 1960s, even amid his burgeoning acting career. Return of the Wayfaring Stranger was reissued in 2000 by Collectables Records with almost a dozen bonus tracks dating from his early days at Columbia Records the latter, mostly done with a light pop orchestra backing, are pleasant enough but don’t readily fit together well with the later material off the actual album, which is done in a more authentic folk style.