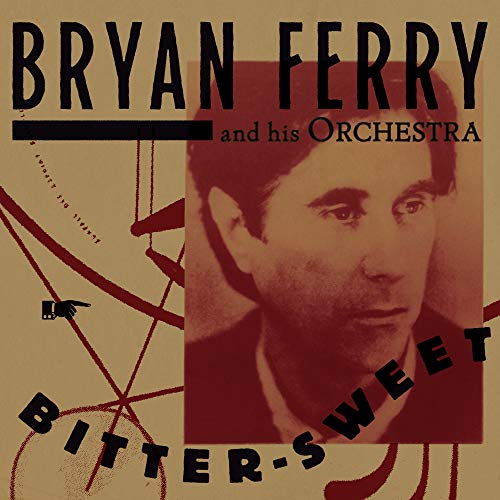 Bitter Sweet, the latest record from Bryan Ferry, is inspired by his work on the Sky Atlantic/Netflix television series ‘Babylon Berlin’ a German period drama based on the books by Volker Kutscher set in the 1920s. It takes the musical stylings from that era and puts a new twist on well loved Roxy Music and Bryan Ferry tracks including ‘While My Heart is Still Beating’, ‘Sign of the Times’, ‘Bitter Sweet’ and ‘Dance Away’. The record breathes new life into songs that fans have been enjoying for over 20 years and whereas Ferry’s previous album in this genre The Jazz Age consisted of instrumentals, Bitter-Sweet includes 8 vocal tracks.

Across the record Ferry embraces ragtime, blues, and jazz, and whilst they evoke nostalgia, hearing beloved songs in a fresh and exciting way gives the record an edge of modernity; jazz in the 1920s was the soundtrack of popular culture – itself a modern invention and it’s almost as if we’re hearing it for the first time.

The album artwork, designed in the style of the period, includes a written introduction by Princeton University musicologist Simon Morrison, and in his analysis he points out; “Bitter-Sweet accomplishes what the modernists of the past, in their youthful enthusiasm, could not. Ferry’s music embraces the artifice of art as well as the artlessness of emotion so that the “sad affair” described at the start leads you to “break down and cry” by the end. Thus we are transported to the Berlin of the Tacheles club and the Chamäleon, to the zeitgeist of that jazz-friendly metropolis in the young 20th century – the hedonistic world of Babylon Berlin.