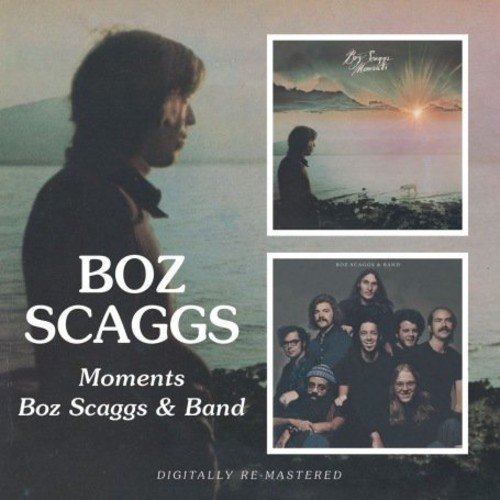 In 2008, BGO released Boz Scaggs’ first two albums for CBS as a two-fer. If his 1969 eponymous debut found Scaggs digging down deep and creating some gritty soul-rock, highlighted by Duane Allman’s extended workout on “Loan Me a Dime,” his 1971 follow-up, Moments (his first album for CBS) found him sketching out the blue-eyed soul that would eventually bring him fame when he streamlined it for 1976’s Silk Degrees. Boz Scaggs was a Southern record, but Moments is thoroughly Californian, sun-bleached and brightly colored, easily gliding along smooth surfaces. In the hands of producer Glyn Johns, Scaggs doesn’t have any rough edges, and the change suits him well, as his soft, soulful croon almost cries out for a setting this lush, one that’s just this side of being louche. Although Scaggs would go that down the gauche road in the ’70s, Moments is far from the glitzy disco of Silk Degrees and its spawn. This is thoroughly a ’60s hangover, right down to how the country shuffle of “Alone, Alone” slides between the warm soul grooves of the rest of the album. Most of this is decidedly laid-back — the casually funky grind of “I Will Forever Sing (The Blues)” and the slyly funny boogie of “Hollywood Blues,” while harking back to the Southern strut of the debut, are the exceptions, not the rule — and while this is mellow, it’s not lazy: it’s a relaxed exploration. By the time “Can I Make It Last (Or Will It Just Be Over)” quietly drifts away on an extended instrumental coda, setting like the sun into the ocean, Scaggs has started down the path toward his signature blue-eyed soul.

However, after the burnished, mellow Moments, Boz Scaggs put some grit back into his music with this third album, Boz Scaggs & Band. Not that he got down and dirty — his blue-eyed soul and funk are still sleek and stylish, music for uptown parties rather than downtown juke joints. But Scaggs gave his band equal billing on the title here because the bandmembers carry equal weight on Boz Scaggs & Band. It’s a true band album, showcasing the group’s tight interplay as much as it does Scaggs’ vocals. Sometimes, the band almost dominates the proceedings too much, as on “Runnin’ Blue,” where the group is as splashy as a Vegas big band. Such excesses are balanced by the nimble “Up to You,” this album’s irresistible foray into country — something that was a regular Boz feature at this point — and the brief, breezy “Here to Stay,” helping to keep things light and casual. But the best thing about Boz Scaggs & Band is hearing that band play, particularly on “Flames of Love” and “Why Why,” where the group gets down low, playing funky rock and soul that hold their own with Little Feat’s Meters-inspired grooves.