Posted by Green on September 16, 2021
in folk-rock, singer-songwriter
as Bob Dylan 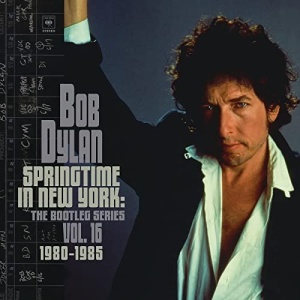 It’s accepted wisdom among a faction of Dylan devotees that causing controversy, stirring emotions, and deliberately ruffling feathers—as happened when he went electric—secretly makes their hero very happy. Nothing (so far) in his career though has caused the ruckus that his late ’70s conversion to Christianity and subsequent gospel albums incited. For the second time in his career, he heard boos from a live audience as he stubbornly performed his new evangelical music on the tumultuous 1979-80 Gospel tour. Although it contained hints that perhaps a secular revival was at hand, the last religious album, 1981’s Shot of Love was savaged by the press and public alike. With the uproar in full swing, Dylan retreated from public view to refresh and regroup. In the spring of 1983, Dylan, who’d by then veered away from religion back to secular subjects, began tracking at the Power Station in New York City with a band that included former Rolling Stones guitar player Mick Taylor, singer Clydie King, and a rhythm section of reggae demigods Robbie Shakespeare (bass) and Sly Dunbar (drums). The resulting album, Infidels, and its closely related follow-up, 1985’s Empire Burlesque, marked a welcome return to relevance and success.

Springtime in New York, the latest volume in the extraordinary Bootleg Series, explores this period, collecting outtakes and alternates from the sessions for these albums—all but three of which are previously unreleased. If there’s a simple explanation for his religious period it lies in the first lines of opener (and Shot of Love outtake) “Angelina”: “Well, it’s always been my nature/ To take chances.” While each addition to the Bootleg series contains its share of revelations, this entry is particularly overflowing with surprises. The opportunity to hear a master musical creator working through songs, trying different tempos, rewriting lyrics on the fly, is fascinating and powerful. Debates over quality aside, the sheer volume of material that Dylan either wrote or covered in these sessions is absolutely astonishing. And longtime fans will particularly treasure the plethora of tracks where Dylan indulges his weakness for pop tunes by covering Neil Diamond’s “Sweet Caroline,” the Michael Johnson hit “This Night Won’t Last Forever” and Dave Mason’s “We Just Disagree.”