Posted by Green on January 26, 2020
in country-rock
as Bill Kirchen 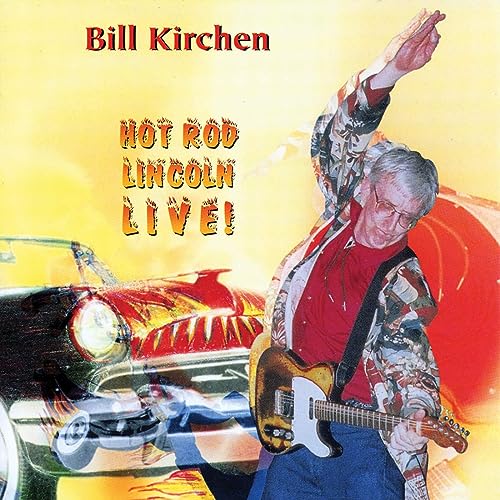 Since his early days as a member of Commander Cody & His Lost Planet Airmen, Bill Kirchen has distinguished himself as a showman of the highest order. This, his first live solo recording, captures the vivacious presence of the man who is without a doubt one of the true fathers of the country-rock movement. His significance to country-rock and American roots music was obvious early on; after 30-plus years in the business, his influence can be found in the work of Nick Lowe, Elvis Costello, and every outfit that tried to marry country & western music to rock & roll after the 1976 demise of the Airmen. Hot Rod Lincoln Live!, recorded in February of 1997 at the Globe Theater in Berlin, MD, gives credence to the undeniable power and spirit of Bill Kirchen. As a performer, vocalist, guitar virtuoso, and bandleader, Kirchen shines. This live disc contains a fine collection of tunes that include old favorites like “Too Much Fun,” “Looking at the World Through a Windshield,” and “Hot Rod Lincoln.” Newer standouts include “All the Secrets of Love,” “Swing Fever,” and “Tell Me the Reason.” While he is effective on all 12 cuts, his treatment of “Cold Country Blues” allows him to join hands emotionally with the ghosts of Jimmie Rodgers and Hank Williams. His rock & roll edge is underscored by some hillbilly spice on “Sometimes I Think.” There are a myriad of magical moments throughout the performance, but the breadth of Kirchen’s talent is given wing as he reprises “Hot Rod Lincoln.” This time, “Hot Rod Lincoln” is a vehicle Kirchen drives with his expertise as he eases into and out of the signature styles of such greats as Roy Nichols (Merle Haggard), Don Rich (Buck Owens), B.B. King, Link Wray, Muddy Waters, Chuck Berry, Duane Eddy, and Flatt & Scruggs, to name just a few. Always in good humor, Bill Kirchen is one of music’s most versatile and glorious treasures. In the studio and live on-stage, Kirchen stands tall.