Posted by Green on October 23, 2022
in blues, swing
as Big Bad Voodoo Daddy 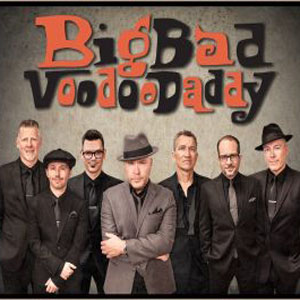 Big Bad Voodoo Daddy is a contemporary swing revival band from Southern California. Their notable singles include “Go Daddy-O”, “You & Me & the Bottle Makes 3 Tonight (Baby)”, and “Mr. Pinstripe Suit”.

The band was originally formed in Ventura, California, in 1989 by leader Scotty Morris. The band was named Big Bad Voodoo Daddy after Scotty Morris met blues guitar legend Albert Collins at one of the latter’s concerts. “He signed my poster ‘To Scotty, the big bad voodoo daddy’,” Morris explains. “I thought it was the coolest name I ever heard on one of the coolest musical nights I ever had. So when it came time to name this band, I didn’t really have a choice. I felt like it was handed down to me.” He and Kurt Sodergren are the two original members, with the rest of the band joining later. The band has concentrated on the swing of the 1940s and 1950s, playing clubs and lounges in their early years.