Posted by Green on August 31, 2021
in cajun, zydeco
as BeauSoleil 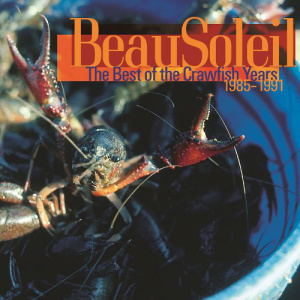 Beausoleil, led by fiddler and singer Michael Doucet, just about singlehandedly brought about the Cajun music renaissance in the ’80s, recording several albums that simultaneously paid homage to the deepest traditions of southern Louisiana musical culture and hauled that culture into the 20th century, imbuing its two-steps, waltzes, and keening prairie French love songs with influences that included country, the blues, and rock & roll. The 17 tracks on this Rounder retrospective reveal a band coming of age, digesting their influences and developing a sound that was truly their own. Whether the music itself is tradition-oriented (like the Doucet composition “La Chanson du Cafe”) or borrowed from some other tradition (like the band’s wonderful rendition of Richard Thompson’s “Woman or a Man,” featuring Thompson himself on guitar), it always sounds just like Beausoleil. In part that’s due to Doucet’s good-naturedly graceless singing, but mainly it comes from the particular sense of joy and fun that they manage to bring to everything they play. Highly recommended. ~Rick Anderson