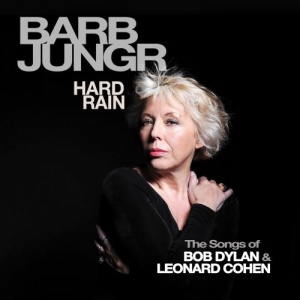 The UK’s finest interpreter of song, Barb Jungr returns to the songs of Bob Dylan and Leonard Cohen with the release of Hard Rain. Oft referred to as “the politicised chansonnier” and cited as one of the world’s best performers of Dylan’s material, Barb turns to six of his most politically hard-hitting songs along with five of Leonard Cohen’s most impassioned songs of conscience. Barb’s selection for Hard Rain reflects her despair with the political times that we live in and she has deliberately chosen songs that resonate as strongly today as they did when they were originally written: “Blowin’ In The Wind” is now 51 years old and its sentiments are as relevant today as they ever were. The album comes complete with insightful liner notes by writer Liz Thomson, who as Elizabeth Thomson prepared “the director’s cut” of No Direction Home: The Life and Music of Bob Dylan (2014). She was also the co-editor of The Dylan Companion. As a young journalist, her first ever interview was with Leonard Cohen. All of the arrangements on the album are by Barb and her long-standing collaborator and accompanist, the pianist Simon Wallace, who also produced the album. In addition to Simon (piano, Hammond organ and synthesizers), Barb is also joined by Neville Malcom on bass (with Steve Watts providing bass on tracks 1,3,8 and 10); Gary Hammond (percussion); Clive Bell (Shakahachi) and Richard Olatunde Baker on talking drum and additional percussion. Together with Barb, they inject new life and energy into each song.
Tracklist: