Posted by Green on May 18, 2020
in alternative rock, Discography
as Audioslave 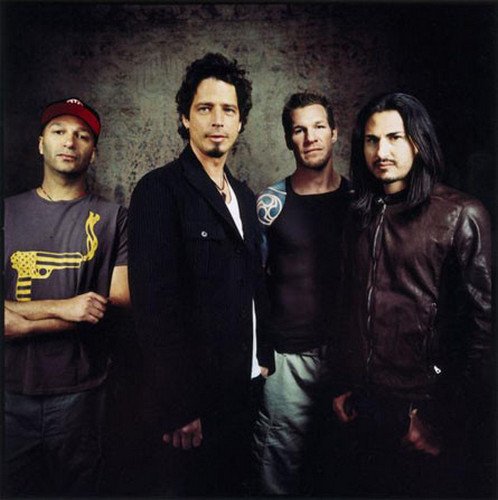 Audioslave was an American rock supergroup formed in Glendale, California in 2001. The four-piece band consisted of Soundgarden’s lead singer and rhythm guitarist Chris Cornell with Rage Against the Machine members Tom Morello (lead guitar), Tim Commerford (bass/backing vocals), and Brad Wilk (drums). Critics first described Audioslave as a combination of Soundgarden and Rage Against the Machine, but by the band’s second album, Out of Exile, it was noted that they had established a separate identity.] Their unique sound was created by blending 1970s hard rock and 1990s alternative rock, with musical influences that included 1960s funk, soul and R&B. As with Rage Against the Machine, the band prided themselves on the fact that all sounds on their albums were produced using only guitars, bass, drums, and vocals, with emphasis on Cornell’s wide vocal range and Morello’s unconventional guitar solos.

In their six years together, Audioslave released three albums, received three Grammy nominations, sold more than eight million records worldwide and became the first American rock band to perform an open-air concert in Cuba. They disbanded in February 2007 after Cornell issued a statement announcing that he was leaving the band. Later that year, Cornell and Morello released solo albums, and Morello, Commerford, and Wilk reunited with Zack de la Rocha for the Rage Against the Machine Reunion Tour.