Posted by Green on November 1, 2018
in british folk, folk-rock
as Ashley Hutchings 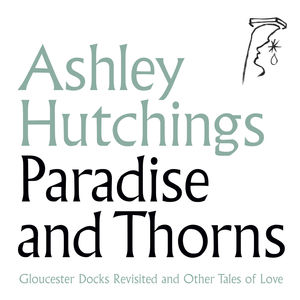 Divided into two discs, Gloucester Docks Revisited and Other Tales Of Love, Paradise And Thorns finds “the single most important figure in English folk rock” (© Bob Dylan) revisiting his seminal autobiographically- based 1987 solo work (already the subject of a live version and revised re-issue) in the wake of reuniting with the old flame (never identified but likely named Patricia) around which it was based and complementing this with a collection of his personal favourite love songs and stories.

Visiting the docks first, this is a sort of continuance of a previously unfinished story that mixes together past recordings, new material, readings and film clips, opening with an echoey Hutchings reading an extract from John Donne’s poem of parted but constant adulterous lovers ‘Elegie XII’ with JJ Stoney providing keyboard effects. It’s followed by a 1985 live recording of ‘Kitty Come Down The Lane’ by the Ashley Hutchings All Stars, featuring Clive Gregson and Polly Bolton, and, in turn, with another reading, this time ‘The Meadow’, a single line extract from Louis MacNeice’ ‘The Strings Are False’.

The first new recording comes with the pastoral ‘Art Nouveau’, exploring the woman as flower metaphor, co-written with Ken Nicol, sung by Barry Coope and featuring string quartet arrangement by Joe Broughton, with himself on violin and Jo Hamilton on viola.

Another reading, ‘St. Valentine Day Sonnet’, is one of Hutchings’ own, about getting a rose tattoo, written in the manner of Donne, then it’s back to 1987 and a recording of the bouncy ‘Trip To Bath’ by The Albion Dance Band, Bolton again on vocals. Jane Wildsmith provides the voice of Pat in ‘Sultana Cake’, a brief extract from a letter, then it’s into the second new song, Tim Walker on trombone and Chris Sheldon on banjo for the New Orleans-influenced ‘Cul-de-Sac’, a playfully wry reference to how the original romance ended. Another live recording, the lost relationship ‘Our Stolen Season’ comes from a 2000 Rainbow Chasers concert, Hamilton on vocal and Ruth Angell on violin, followed by the first of the film clips, a brief extract (in French but translated in the booklet) from Alain Resnais’ 1960 Last Year In Marienbad before Fred Claridge’s drums introduce the Western-movie soundtrack flavoured ‘Devil-may-care In Our Dancing Shoes’, a down to the crossroads lost souls number co-penned with son Blair Dunlop who also plays acoustic guitar, that brings Pat back into the picture with the lines “Years passed by, then out of the blue/ The call of the road and a text or two.”

Michael Maloney voices an excerpt from Pushkin’s Eugene Onegin, followed by another French film clip, this time ‘It Was My Heart’ from Robert Bresson’s Les Dames du Boi de Boulogne, the screenplay by Cocteau. Then, preceded by a lengthy introduction in which Hutchings explains the background to Gloucester Docks (and the title’s links to both the psalm ‘By Waters Of Babylon’ and Elizabeth Smart’s ‘By Grand Central Station I Sat Down And Wept’ as well as offering a Tristan and Isolde context to the story of doomed love), a 1988 All Stars concert recordings of ‘I Dreamed A Dream’ featuring just Bolton and John Shepherd’s keyboard.

The last of the new songs, again written with Dunlop, and featuring both him and Nicol on electric guitars, brings things up to the present day with the lyrically optimistic ‘Thirty-two Years And A Lifetime’, which, after the initial set-up, breaks out into a punchy, upbeat folk-rock melody that may well have travelled over the Cork and Kerry mountains.

It ends with the brief spoken ‘Epilogue’ which brings the lost love back into his life, the pondered question “What is to become of us?” possibly answered as the tracks flows into an arrangement of the traditional ‘French Catholic Wedding Tune’ with Stoney on churchy organ and Becky Mills providing the choral vocals.

Having duly conjured a romantic glow, the second disc beats the heart with a collection of all new recordings, again intercut with clips and readings, that gets under way with rising star Kitty Macfarlane on acoustic singing her own ‘Avona And The Giant’, a song based around the legend of the Bristol giants Vincent and Goram and how, after losing the love of Avona, the latter through himself into the river, his torso forming the isles of Steepholm and Flatholm.

Macfarlane also closes the album, this time, preceded by an extract from the prologue to Romeo and Juliet, with her arrangement of ‘Fear No More The Heat O’ The Sun’ from Shakespeare’s Cymbeline.

In-between clips are taken from the 1932 film adaptation of Ernest Hemingway’s WWI story A Farewell To Arms with Gary Cooper and Helen Hayes, Tony Richardson’s 1968 Charge of the Light Brigade and, given the theme, what else but Bogart and Bacall in Casablanca, here in the form of the “I remember every detail” scene.

There’s readings too, Michael Maloney giving John Donne another outing with ‘Aire And Angells’, Hutching and cheering crowd with 30 seconds of ‘If Love Has Wings’ from The Marriage of Figaro (Beaumarchais not Mozart) and a brace of Chekhov with two extracts, pre and post-marriage, from the playful ‘Notes from the journal of a quick-tempered man’.

There’s only one previously releases track, ‘Welcome To The World’ taken from The Albion Band’s eponymous 1999 album, the remainder being all new material. Evoking formative Fairport folk rock and preceding the Donne, ‘Above The Angels’ is sung by Mills with Nicol and Dunlop on electric guitars and Stoney tinkling the piano, ‘If There’s No Other Way’ is an acoustic, strings-arranged Hutchings/Broughton ‘love in vain’ ballad with Bolton on soaring vocals and, revisiting bird imagery, simple acoustic ‘The Swift’, with its title wordplay, is written and sung by Mills.

There’s two traditional numbers, ‘Polly On The Shore’ (or at least an except therefrom) providing a solo showcase for Dunlop, accompanying himself on electric guitar, while, co-produced by Joe Boyd, ‘Sykaleshe’ is a love song performed in their native tongue by Albanian folk outfit Saz’iso, and which seems likely to be an outtake from their 2016 album At Least Wave Your Handkerchief At Me: The Joys and Sorrows of Southern Albanian Song. Which just leaves ‘Lost In The Haze’, father and son teaming for a first time ever I saw your face memory of first love recalling how Hutchings was smitten by a girl he met as part of a 1964 Methodist Youth Club ramble though Hertfordshire, immortalised in the photograph in the superb accompanying annotated hardback lyric booklet.

The original ‘By Gloucester Docks I sat down and wept’, released in 1987, ended on a painful note, but it finally now has a happy coda; after waiting by the Quay for 30 years, Hutchings’ ship has come in.