Andrew Weiss and Friends – The Golden Age of Love & Chemistry (2020)

Posted by Green on April 6, 2020
in americana
as Andrew Weiss and Friends 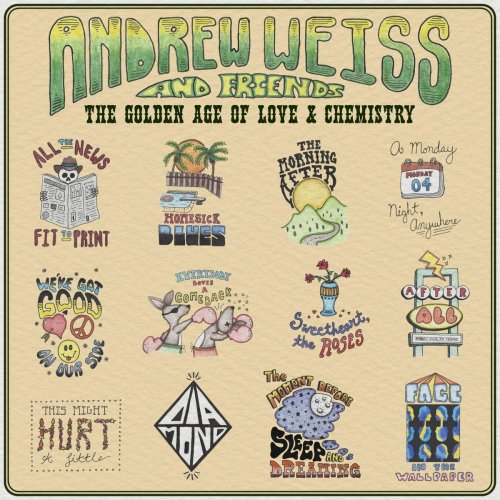 In this time of trouble, Andrew Weiss and His Friends have given us an album to lift our spirits which enables us to think of love, life and happiness. The album is, as Weiss says, ‘music made by real musicians playing together, singing about real-life’, and this allows us to feel as though we are hearing life stories from Andrew, something which is at the heart of all great Americana albums.

‘Homesick Blues’ is a great song to come near the start of the album, piecing together a really fun guitar track with great lyrics. The song tells us about the ways in which humans can disappoint each other as well as how good things could be if everyone put their mind to it. But the funny lyrics are where it stands out, with the line ‘just because you’re rich doesn’t mean your happy, but I wish I was… rich!’ is comedian-esque.

‘A Monday Night, Anywhere’ is the best song of the album. When reviewing it, I got lost in the song and felt like I’d been listening to (and enjoying) it for years. It’s groovy and filled with brilliant electric guitar. But what’s particularly interesting is in how much detail Weiss has thought the album through. The songs almost converse with one another, with the following song, ‘We’ve Got Good On Our Side’, continuing the conversation about life.

The album has a real ‘pop-rock’ vibe in a lot of ways, but it’s not a reason to put it down. ‘Sweetheart, The Roses’ is a great love song. But the whole album isn’t uplifting and fun, with it taking you on a real journey of life. ‘The Moment Before Sleep and Dreaming’ is an example of a brilliantly crafted slow song. Written with the US drama ‘This is Us’ (which I’ve never seen…), it is amazing to see how Weiss has created a tear-jerking piece of music.

Overall, the album feels brilliantly crafted. Whenever you feel like you have heard the same style of song, Weiss changes it entirely with the next one, capturing a perfect balance between the slow and fast songs. It’s rare to fully understand a whole album but Weiss’ voice is so clear, resulting in his message coming across so well.

Weiss has the unique ability to evoke so much emotion in his songwriting, and his success alongside his friends will surely come with it.