Posted by Green on March 4, 2018
in alt-country, americana
as 3hattrio 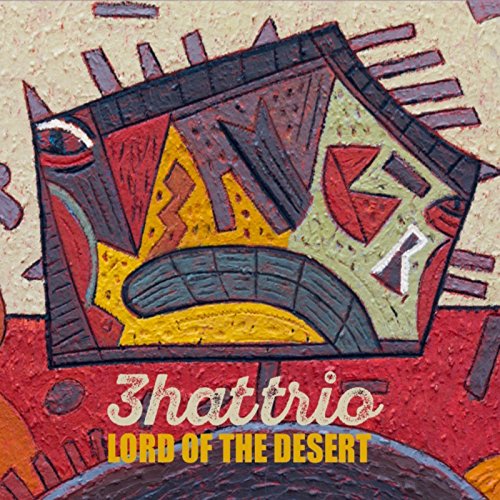 Dust Devil (featured on Folk Show Ep. 17 here) is a deceptive introduction to the latest album from the Utah desert-based string trio 3hattrio, a banjo, fiddle and double bass driven itchy rhythm stomp with Hal Cannon’s dust-dry vocals upfront and Greg Istock on reedier distant backing. The landscape remains familiar with the parched gospel blues Pilgrim, Eli Wrankle’s electric fiddle pulsing away behind the insistent double bass and glowering guitar. But then comes Night Sky and we’re into electronic effects colouring the violin-led instrumental with its dry psychedelic tumbleweed blown by tabla-like percussion. Then, get to the spiritual-themed In Our Hands and they’re experimenting with loops and samples as snatches of sermons weave behind the scratchy banjo and hypnotic sawing violin and double bass mantra as Cannon intones “faith is in our hands”.

Istock taking lead (on mostly impressionistic vocals) and with tabla again providing the rhythmic foundation, the atmospheric War paints in Middle Eastern and Egyptian colours, tinted with hints of Native American, further electronic winds blowing across the sandy terrain, while, again written and sung in desiccated tones by Istock, Faith blends sparse, minimalist banjo with orchestral violin, the title underscoring a thematic thread that weaves through the album.

A third Istock showcase, a lyrically opaque chanted I Am is pure peyote delirium enveloped in a haze of banjo, guitar, bass, fiddle lines and bass drum dancing around like the indigenous desert animal spirits evoked on the album cover. More spoken than sung by Cannon, the reflective, lost in memories skeletal mountain folk of Wastelands of Yesterday strips it back down to bleached bones basics.

The album’s second instrumental, Skeleton Tree, a drone built around sawing fiddle and spectral banjo, again conjures a ghostly night ambience, the tempo picking up with the urgent riffing and stomp rhythm of the near six-minute Motel, again largely undecipherably mumbled by Istock, with its suggestions of trance-inducing ritual tribal dances.

The final stretch begins with the Istock’s raspily arid, back of the throat blues moan Won’t Help, the lyrics again slurred to out of body effect. Lyrically downcast with its gaze turned on the state of the nation, Poor Boys, penned and sung by Cannon is a desolate fusion of blues and traditional folk, the album ending with the title track, co-written by Cannon and Wrankle, a spoken, echoing vocal, desert gospel come down from the mesa as, accompanied by haunting violin, the narrator preaches how his words paint the desert sand, that he is “the one that darkens the land and lashes her tenants with dust and sand”and who “holds dominion over all emptiness.” Their most adventurous and eclectic work yet, long may they reign.