Posted by Green on December 3, 2019
in folk, roots rock
as Willis Alan Ramsey 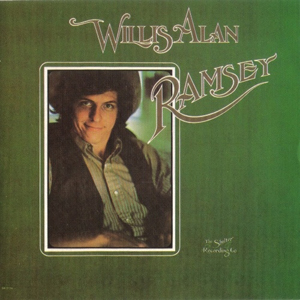 In many ways, Willis Alan Ramsey’s debut album makes him sound like the archetypical Texas singer/songwriter; there’s more than a little Guy Clark in his approach, a healthy dose of Townes Van Zandt, a dash of Jimmie Dale Gilmore, and one can hear the echoes of what Steve Earle and Lyle Lovett would draw from this music. But Ramsey’s style — an engaging mixture of cowboy poetry, post-hippie wit and wonder, and singer/songwriter introspection — burst forth fully formed in 1972, while Van Zandt was still barely a rumor outside the Lone Star State, and Clark had yet to make himself heard on vinyl; Ramsey was at once a contemporary of the first wave of Texas songwriters, and one of the artists who blazed the trail for what would become one of the most fruitful tributaries of American roots music. While a number of artists covered material from Willis Alan Ramsey (the Captain & Tennille most famously with “Muskrat Candlelight” — retitled “Muskrat Love” — though Waylon Jennings, Jerry Jeff Walker, and even Jimmy Buffett fared better creatively), one listen to the album is enough to convince anyone Ramsey was as much a performer as a songwriter. The bluesy drawl and frayed edges of Ramsey’s voice convey a road-worn maturity that betrayed his youth (he was in his early twenties when he cut these sessions), and his production (in collaboration with Denny Cordell) is remarkably intelligent and imaginative for someone with so little experience in the studio. From the tragic road story of “The Ballad of Spider John,” the weary nostalgia of “Goodbye to Old Missoula,” and the Woody Guthrie tribute of “Boy from Oklahoma,” to the horny twang of “Geraldine and the Honeybee” and the goofy music-biz meditation of “Satin Sheets,” Ramsey hardly makes a false move or a poorly considered gesture through the course of the album’s 40 minutes. Part of the mystique that has sprung up around Willis Alan Ramsey’s debut album is that he dropped from sight after recording it (due to differences with his record company and a lack of enthusiasm for the realities of the music business), and has yet to release a follow-up, and it’s hard to imagine anyone who has heard it not hoping there’s more where this came from. If your recording career was to be contained in a single album, though, you’d be very fortunate if it were as good as Willis Alan Ramsey.