Posted by Green on October 7, 2019
in blues
as William Clarke 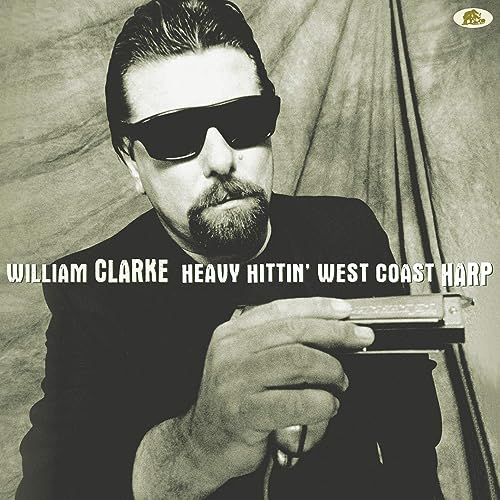 • William Clarke (1951 – 1996) ranks alongside Rod Piazza among the most successful harmonica players from the George ‘Harmonica’ Smith school in Los Angeles.
• He is regarded as the master of an extremely “fat” tone and a playing style that is reminiscent of saxophone virtuosos at times.
• First vinyl retrospective spanning almost his entire and much too short career.
• Studio recordings, most of which had been posthumously released on now long deleted CDs on the small Watch Dog label.
• Including a previously unreleased studio recording from the 1990s.
• Compiled by producer and harmonica player Bob Corritore, who also wrote the liner notes.
• Carefully remastered by Tom Meyer and pressed by Optimal media, 180-gram edition in a gatefold sleeve, limited to 1.000 copies.

After some tough early years in which he managed to stay afloat with mostly poorly paid gigs in small clubs and only occasionally came out of Los Angeles or Southern California, William Clarke (March 21, 1951 – November 2, 1996) signed with the famous Alligator Records label. With his debut album ‘Blowin’ Like Hell’ for the Chicago blues factory, the West Coast’s blues secret became an endlessly touring international star of the scene!

With ‘Heavy Hittin’ West Coast Harp’ we pay tribute and respect to one of the greatest harmonica stylists. As an instrumentalist William Clarke was strongly influenced by George ‘Harmonica’ Smith, a Chicago contemporary of Little Walter and Walter Horton. Smith came to Los Angeles for a recording session in 1956 and settled on the West Coast. Similar to his iconic idol Smith, from whom he learned a lot of tricks in countless joint appearances, Clarke was equally at home on the cross harmonica as on the chromatic. The combination of Chicago-style harmonica and the cool groove and swing of West Coast blues and jazz met the open ears of blues fans all over the world. On his first album ‘Hittin’ Heavy’ he is accompanied by Hollywood Fats on guitar, later recording sessions include Ronnie Earl, Junior Watson, Rick Holmstrom and Alex Schultz a.m.o.

Bob Corritore, for many years a prolific blues musician and first-class harp player, producer and influencer, has compiled this album and written the liner notes for Bear Family. With this release, we would like to pay tribute to one of the West Coast’s greatest blues men, who had to lay down his instruments far too early in 1996.