Posted by Green on November 24, 2020
in folk-rock
as Victoria Williams 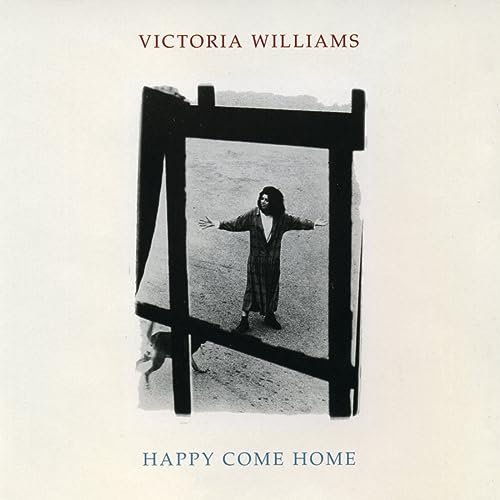 It is indeed a rarity when a debut album is able to distil the essence of any artist. However, Victoria Williams is considerably more than just any artist and Happy Come Home is the personification of the word eclectic just like Williams herself. She wasn’t alone in creating her eponymous masterpiece, either. A cavalcade of pop and rock music’s elite congregated with Williams in the celebration of the varied music on the album. The simple folk tales, sage-like observations, and just plain good advice that she writes about are personified by an unbelievably delicious cast of characters both in the studio as well as in between the lines. There is an undeniable strength and maturity in Williams’ songwriting. Like few artists or albums, Happy Come Home reveals an artist fully developed with a style and persona that is uniquely American and arguably irresistible. Another musician fitting that description is Van Dyke Parks whose contributions to this disc are almost immediately evident. His signature orchestral flourishes are unmistakable throughout the string arrangements for “TC,” “Main Road,” and the opening cut, “Shoes.” Sonically, his pallet blends the humor and whimsy of Mark Twain with the noir romanticism of George Gershwin. These hues ideally suit Williams’ folk-tinged songs. In the case of “TC” a legitimate pocket symphony there are also a few well-placed nods to Prokofiev’s “Peter and the Wolf. The rock & roll pieces notably “Animal Wild” and the trippy “Merry Go Round” are best described as late-’80s alternative or college rock. A quick rundown of the personnel might best give an idea of the direction Williams found herself and her music in, as it was being somewhat moulded by producer Anton Fier. Among the luminaries are: Syd Straw, Bernie Worrell, T-Bone Burnett, Carla Bley, Peter Blegvad, and Hugh McCracken. Their various and unspecified contributions are at times typical, but never predictable. It would be futile to attempt a list of all the disparate musical styles that unify Happy Come Home. They range from gospel (“I Will Do His Will”) to acoustic folk (“Happy Come Home” and “Lights”) and hit upon more subtle influences such as jazz (“Big Fish”) and even a sort of bayou travelogue “Opelousas.” Concurrent with the release of the album, Williams was the subject of a 28-minute documentary by legendary filmmaker D.A. Pennebaker. The video also titled Happy Come Home features nine of the 13 tracks from the disc, including a few performed spontaneously for the camera. Originally aired on MTV, it was briefly available on VHS at Williams’ live shows.