Posted by Green on November 7, 2019
in americana, country
as Various Artists 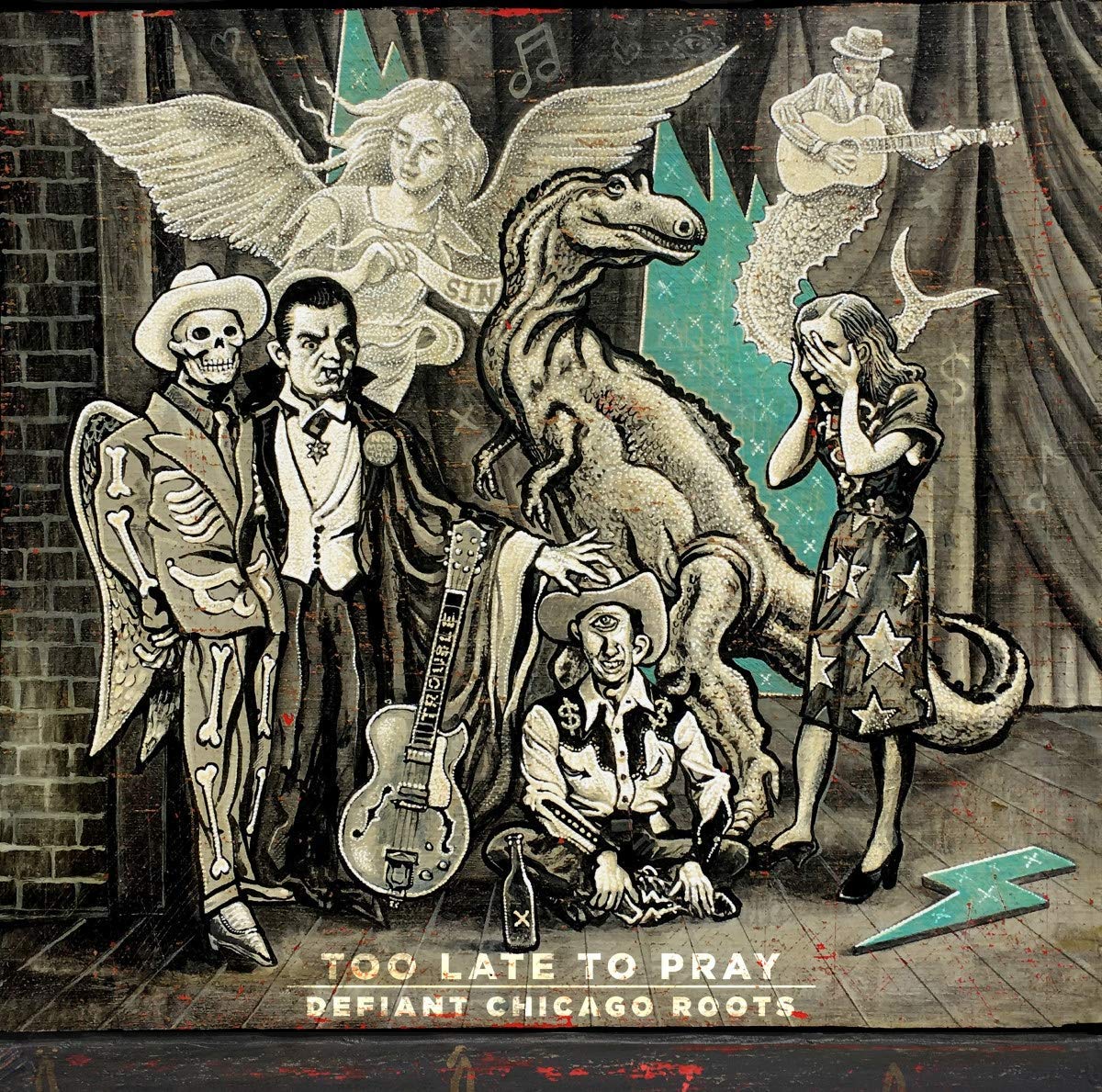 Bloodshot Records was born in 1994 with the release of its first album, the scene-capturing compilation For A Life of Sin: Insurgent Chicago Country. For the 25th anniversary, they wanted to come back home to shine a light, once again, on Chicago – ever-changing, ever-vibrant, ever-on-the-make – to champion the storytellers who keep the city a vital place.

Too Late to Pray: Defiant Chicago Roots is a redux of For A Life of Sin. It is a current magnifying-glass-look at some – but not even close to all – of the artists and groups making unique and special music in the city’s roots scene. Some of the artists you may have heard of; some are woven so tightly into the fabric of the city, it’s hard to imagine a time without them; some we’ve claimed, whether they like it or not, as natives; some you might be hearing for the first time; and some you may never hear from again. Robbie Fulks, Freakwater, Jon Langford’s Hillbilly Lovechild (featuring Steve Albini), and The Handsome Family return in resplendent form from their contributions on For A Life of Sin and maintain their unchallenged status as guardians of the traditional guard.

Other featured artists are just as well-regarded in their accomplished tenure and we are now fortunate enough to release some of their exceptional music: Tammi Savoy, The Hoyle Brothers, Brendan Kelly, Lawrence Peters, and The Western Elstons. Some we have worked with before in other forms (Bethany Thomas & Tawny Newsome of Jon Langford’s Four Lost Souls Joybird’s Jess McIntosh); some have interned and worked at Bloodshot (The Dyes, Kelly Hogan ; others are more recent trailblazers of the scene and are driving it in exciting, new directions (Rookie, Wild Earp, Big Sadie, David Quinn, The Family Gold, Sima Cunningham of Ohmme, Saluda Moonlighters, Los Gallos).

1.Wild Earp & the Free for Alls – The Last Honky Tonk in Chicago
2.Tammi Savoy and the Chris Casello Combo – If It’s News to You
3.Jon Langford’s Hillbilly Lovechild – I Am a Big Town
4.Half Gringa – Wearing White
5.Brendan Kelly and the Wandering Birds – Lay Me Down
6.The Family Gold – The Sun Is Going Down
7.Big Sadie – You Never Told Me
8.ROOKIE – Head Over Heels
9.The Dyes – Liza Jane
10.Robbie Fulks – Lonely Ain’t Hardly Alive
11.Freakwater – Sway
12.David Quinn – Long Time Gone
13.The Hoyle Brothers – A Little Bit of Buck
14.Bethany Thomas & Tawny Newsome – Dinosaur
15.Sima Cunningham – Weeds and Daisies
16.The Lawrence Peters Outfit – I Wrote You a Song
17.Kelly Hogan – Gotta Have My Baby Back
18.The Saluda Moonlighters – Honky Tonkin’ in the Moonlight
19.Los Gallos – Yeah Yeah Yeah
20.Joybird – The Sweetness
21.The Western Elstons – Toast That Lie
22.The Handsome Family – Tower of Song