Posted by Green on July 18, 2021
in british folk, folk-rock
as Various Artists 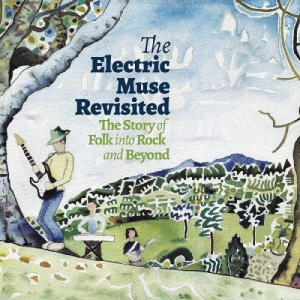 61-track, 4-CD set explores the experimental side of the British folk scene, from the folk-rock era to the present.

Includes new and unreleased recordings from Imagined Village (the first new music from the band in 9 years, with vocals from Eliza Carthy), Justin Adams, and Stick In The Wheel, unreleased songs from Maddy Prior and Lavinia Black-wall, and rare demos from Sandy Denny and Richard and Linda Thompson.

The remarkable cast also includes everyone from Shirley Collins and Fairport Convention to Billy Bragg, June Tabor and Oysterband, Eliza Carthy, Jim Moray, Olivia Chaney, Spiro, Lau, Jon Boden, Martyn Bennet, Capercaillie, Stick In The Wheel, Sam Lee, Catrin Finch & Seckou Keita, Yorkston Thorne Khan and many more.
Compiled by writer and broadcaster Robin Denselow, who also wrote the 24-page sleeve notes, the boxset is released to coincide with publication of the book of the same title (on Omnibus) – which is an updated version of the celebrated story of the folk-rock era The Electric Muse, first published in 1975. This boxset brings together an extraordinary cast of great musicians for the first time, and tells the story of how British traditional music has been re-worked with influences not just from rock but from punk, rap, electronica, big band brass, and sounds and styles from around the world.