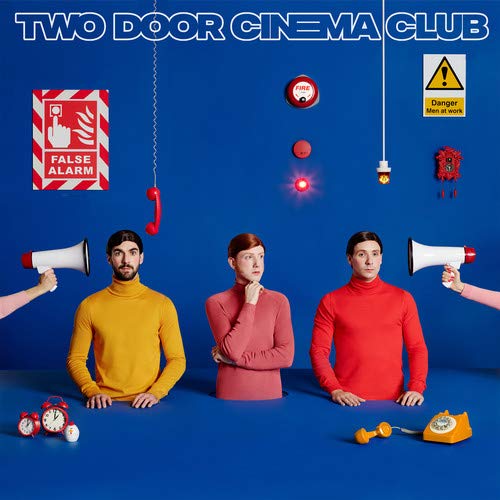 False Alarm as a title could be a reference to the organised chaos Two Door Cinema Club have created when putting this suite of songs together; assimilate the tracks individually, and each one shines through like a hidden gem in an eclectic, indie playlist. Tracks such as “Satellite” and “Once” showcase a new Two Door Cinema Club unlike anything we’ve heard, flying close to the likes of Glass Animals, Phoenix and Tame Impala.

The band’s clear understanding to keep abreast of industry trends in popular and indie genre development, ensuring they are not lost in the sea of homogeneity and mediocrity, is definitely something that False Alarm makes evident. “Already Gone” is a track that brings Tame Impala’s Kevin Parker to mind, with the versatile vocals of Alex Trimble in full flight, going higher than he has done previously and to great effect.

After four years of waiting and watching, False Alarm is an album which reminds us of so many different artists in the past four years of music, never committing to one predictable sound. It is a unique album that splits the Two Door Cinema Club sound in half, in the same way that it is bound to split opinions.

If the job was to create a new, adventurous sound to complete a transformation in the making since Gameshow, these guys have definitely done the job. This is an album of bold, aggressive regeneration that does not fall short.