Posted by Green on January 13, 2020
in americana, country, folk
as Tom Russell 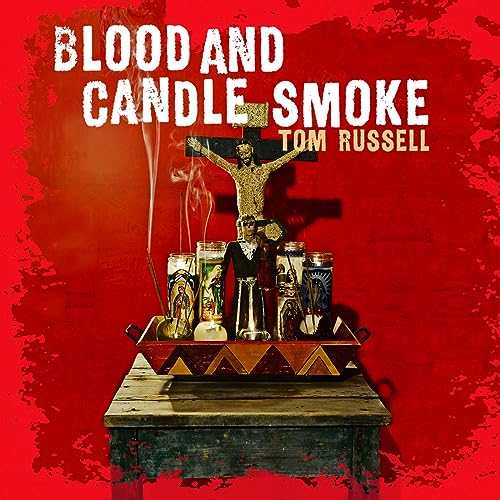 On 19 previous albums, songwriter Tom Russell has told stories about secret histories and compelling, desperate characters along the way. He’s written about William Faulkner in Hollywood, the camps at Manzanar, a prisoner in Washington State whose cellmate was Little Willie John, and name-checked — without artifice — everyone from to Archie Moore to Charles Bukowski. On 2006’s Love and Fear, the songs began to change shape. “The Pugilist at 59,” “Beautiful Trouble,” “Stealing Electricity,” and “Ash Wednesday” transcended his usual tropes; they were darker, more vulnerable and tautly confessional and poetic. Here, on Blood and Candle Smoke, he’s perfected this method of songwriting and learned to record in a completely new way, to boot.

Co-produced with Craig Schumacher, and cut at Wave Lab Studios in Tucson with members of Calexico and others, it sounds like nothing else in his catalog. Russell played his guitar and sang live with the band, providing little direction and allowing the musicians to open up a natural space around him. Instrumentally, this collaboration employs everything from mariachi and jazz horn sections, reverbed electric guitars, organic acoustics, and miniscule drum kits to hand percussion, marimbas, accordions, talking drums, Vox organs, and Rhodes pianos. The backing and duet vocals by songwriter Gretchen Peters add warmth, depth, dimension, and presence to Russell’s songs.