Posted by Green on November 23, 2020
in Discography, folk, latin
as Tish Hinojosa 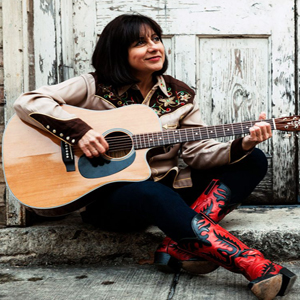 Leticia (“Tish”) Hinojosa (born December 6, 1955, San Antonio, Texas) is a folksinger recording in both Spanish and English. Hinojosa was the youngest of 13 children. Hinojosa’s parents were Mexican immigrants. Known for singing both traditional Mexican folksongs and her own original songs, both in Spanish and English, Hinojosa accompanies herself on guitar, which she plays right-handed although she is naturally lefthanded. Influenced by traditional Mexican, folk, Tejano, conjunto, and country musics, Hinjosa considers her music to be music of the US/Mexico border. Hinojosa has charted twice on the Billboard country charts and has recorded several albums, primarily for Rounder Records.
Her 1992 album Culture Swing won the NAIRD Indie Folk Album of the Year.
Using music to bring awareness to cultural issues, Hinojosa hopes to bring into focus the plight of migrant workers and children of the poor. Additionally, she often performs children’s music of her culture in order to help children develop an understanding of the Southwest’s Hispanic traditions.