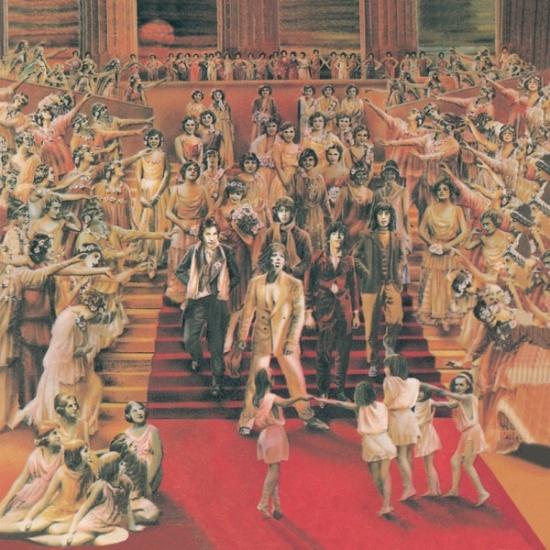 Though it wasn’t as successful as their prior albums, It’s Only Rock ‘n Roll was an important transitional album for the Rolling Stones. Long-time producer Jimmy Miller was out, and the album was self-produced by guitarist Keith Richards and singer Mick Jagger under the pseudonym “The Glimmer Twins”. Guitarist Mick Taylor missed the initial recording sessions with health problems, and ended up quitting the Rolling Stones a few months after the album’s release. The rest of the instrumentation included bassist Bill Wyman and drummer Charlie Watts, as well as frequent collaborators Ian Stewart, Nicky Hopkins, and Billy Preston, and featured the first appearance of percussionist Ray Cooper, who would continue to work with the Rolling Stones into the 1980s.

The title track bears special note as it was recorded separately from the rest of the album. The basic rhythm track had been laid down by members of the Faces, including rhythm guitarist Ronnie Wood and drummer Kenney Jones, during a jam session with Mick Jagger, David Bowie, and bassist Willie Weeks. Jagger liked the song so much, he brought the basic track to Richards, who added some guitar overdubs, and after some polishing, it was put on the album as-is. After Taylor left the Rolling Stones at the end of 1974, the band would approach Wood to become a full-time member.

“It’s uneven, but at times It’s Only Rock ‘n Roll catches fire. The songs and performances are stronger than those on Goats Head Soup; the tossed-off numbers sound effortless, not careless. Throughout, the Stones wear their title as the “World’s Greatest Rock & Roll Band” with a defiant smirk, which makes the bitter cynicism of “If You Can’t Rock Me” and the title track all the more striking, and the reggae experimentation of “Luxury,” the aching beauty of “Time Waits for No One,” and the agreeable filler of “Dance Little Sister” and “Short and Curlies” all the more enjoyable.” (Stephen Thomas Erlewine, AMG)