Posted by Green on June 27, 2021
in experimental, rock
as The Residents 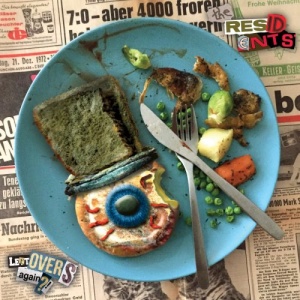 As the Sixties mutated into the Seventies, a group of people who would go on to become a group of people who would go on to become The Residents began making their first recordings. Using a two-track machine, this gaggle of crazy kids, and The Residents, produced two experimental tapes, ‘Ballad Of Stuffed Trigger’ and ‘Rusty Coathangers For The Doctor’. Crude and throwaway, this material was never intended to be heard by anybody outside of the group. Not even by anybody inside the group, if possible. They were experiments, nothing more, and littered with false starts, feedback, chatter and bad jokes. However, the tapes began to gain cult status as word of their existence spread alongside The Residents’ fame (having been first mentioned by Matt Groening in his 1979 ‘True Story Of The Residents’). The group, however, remained unmoved. They really hate this stuff. However, they do admire their fans’ persistence, and appreciate their patience. So presented here, by popular demand, is a ‘concentrate’ showcasing the small portion of ‘Rusty Coathangers’ material deemed even vaguely listenable by the group, under considerable pressure from The Cryptic Corporation. And as for ‘Ballad Of Stuffed Trigger’, well you can forget about that one.