Posted by Green on September 24, 2020
in southerrn rock
as The Outlaws 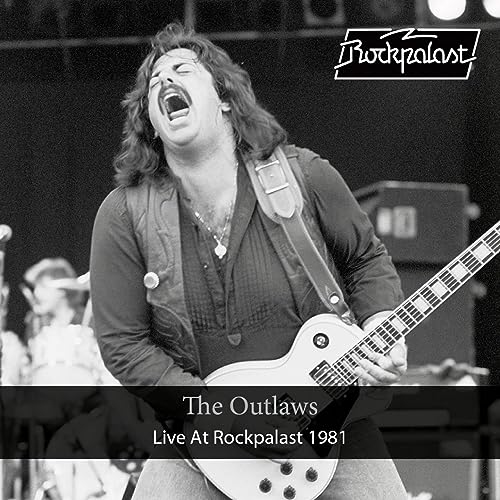 The Outlaws above the rocks of the Lorelei in Germany! In the summer of 1981, for the first time in Germany, what a statement about Southern Rock! 60 minutes full of unbridled joy of playing, bursting with power and endurance. “The Eagle Has Landed”, the crew was Freddie Salem (guit./voc.), Hughie Thomasson (guit./voc.), Billy Jones (guit./voc.), David Dix (drums) and Rick Cua (bass) on the Lorelei on August 29th 1981. The Outlaws had released their commercially successful album “Ghost Riders” one year before. The track “(Ghost) Riders In The Sky” (original title: “Ghost Riders In The Sky: A Cowboy Legend”) was penned by Stan Jones, had already been covered by Johnny Cash and the Blues Brothers and became the new anthem of Southern rock fans in the Outlaw version. At the Lorelei, the Outlaws played an 8-minute version of “Ghost Riders In The Sky” with a guitar battle between Freddie Salem, Hughie Thomasson and Billy Jones while the blissful fans in the audience waved an oversized Southern States banner. An incredible live experience is also their other Southern statement “Green Grass And High Tides”, which stretches over breathtaking 20 minutes. Guitarist Freddie Salem remembers: “Speaking for the other Outlaws and myself, after playing in thousands of shows for thousands of people, Lorelei Germany and The Rockpalast concert will always remain a wonderful and ongoing memory in our career!