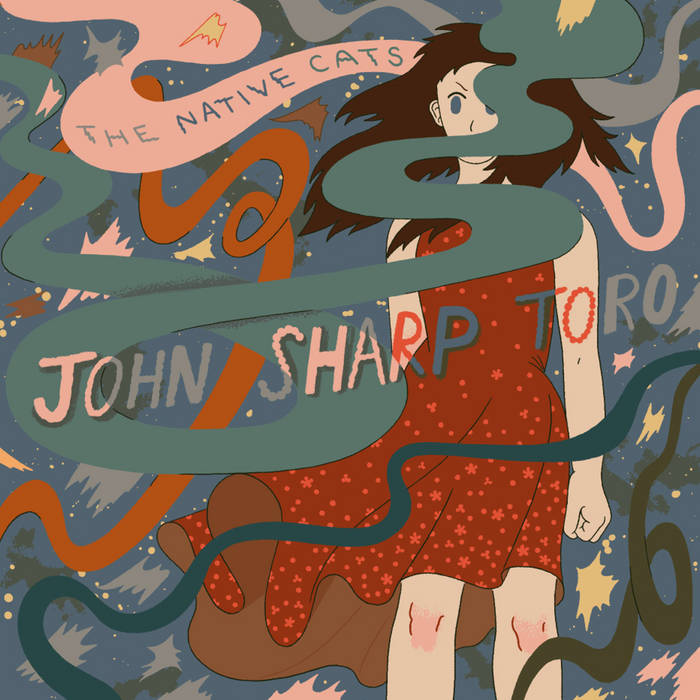 Tasmanian pub rock iconoclasts the Native Cats have, after ten years, become completely unmoored. Chloe Alison Escott read Nevada, spun out into an unplanned gender crisis, then finally transitioned, changed her name and became one of those true authentic selves you hear about on the news; Julian Teakle read The Big Midweek, stopped writing Peter Hook bass lines and started writing Steve Hanley ones instead. Metamorphosis! Tumult! And a new album: at last, February 2, 2018 on RIP Society, their meticulous masterpiece, John Sharp Toro.

The timeline tells the story. They recorded ten songs in a day at their home studio in South Hobart. They didn’t touch any of it for almost a year while Chloe’s whole life exploded and reassembled itself. Then Chloe channeled some of that personal transformation into the album, retaining Julian’s invigorating bass lines but radically re-recording and rearranging everything else. The end result merges the chaotic urgency of Swell Maps and the Fall with the idiosyncratic production and labyrinthine album concepts of Blood Orange and Kendrick Lamar. There are recurring lyrics, haunting reprises, codes upon codes, foreign voices, personal archive recordings, distorted synths that arrive without warning like floodlights cutting through fog. It’s about queer isolation and loneliness, transfiguration, the ways that lives and relationships continue after they’ve been altered; it’s also about digital spaces, the US Republican Party in the second half of the 20th century, and James M. Cain’s opera-scene noir Serenade, the origin of the album’s title.

But beneath the coils and complications is the most bracing and immediate album the Native Cats have ever recorded. There’s life in every corner of every song: guest drummer Sarah Hennies sends the band twisting and turning into new territory with just a kick and a snare; Julian has never been more animated or inventive in his bass playing than he is here, as he makes each song bounce, swing, or stampede as he sees fit; and Chloe sings mightily and without inhibition at last, with a voice that’s entirely her own, every word lit up in neon, every line rich with meaning. It’s John Sharp Toro, the exhilarating queer post-punk puzzle-box mystery thriller you never knew you needed and you certainly never expected the Native Cats to be the ones to deliver.