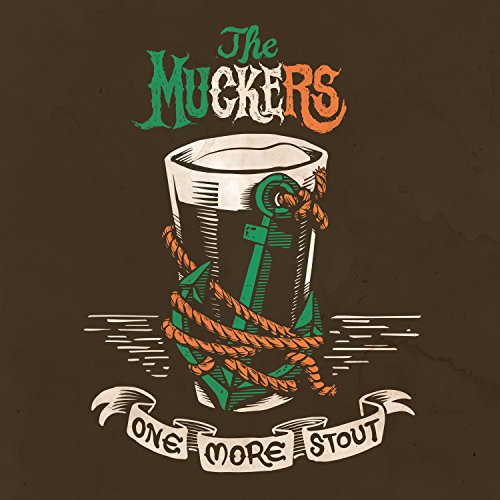 The album kicks off with “Let’s All Go to the Bar”. This is a song by a band called Deer Tick, but one may think that it’s a self-penned number. The accordion plays the major role and there is a good mandolin passage at the end. The other covers are tracks no. 4, no. 6, no.8 and no. 9. “Black Irish” is an upbeat song by a band called The Devil Makes Three. It begins with the fiddle, and then the other instruments join. “Long Gravel Road” is a fiddle led number by Cutthroat Shamrock. Great Big Sea “Old Black Rum” is played with gusto. “God Save Ireland” is a lively number with amazing accordion à la The Pogues. My fave together with “Let’s All Go to the Bar”.

Jeff has put words to an East European tune on “Limonchiki”. Fiddle and accordion do a great job on this number that The Dreadnoughts fans will appreciate. Finally, a trad. tune closes the album: “Castle Kelly”. The Muckers deliver a kick-ass rendition of a tune that is not overexposed.

The originals are mainly a bunch of excellent drinking songs: the catchy “Day Drinking”, the Poguesish “One More Stout”, “Whiskey” (which gets a balladeer treatment) and the cow-punk number “Drunker’n Cooter Brown” featuring accordion and mandolin. Special mention to the second cut, “Hellbound” and its awesome fiddle arrangements.

Jeff and the boys keep up the good work that they began with their debut album. They take the spirit of The Clancy Brothers and The Pogues and add their own American influences to the mix. Besides, they stay away from the usual overexposed standards and their choice of the songs to cover is spotless. In other words, The Muckers are a fantastic band to party.