Posted by Green on August 9, 2018
in southerrn rock
as The Magpie Salute 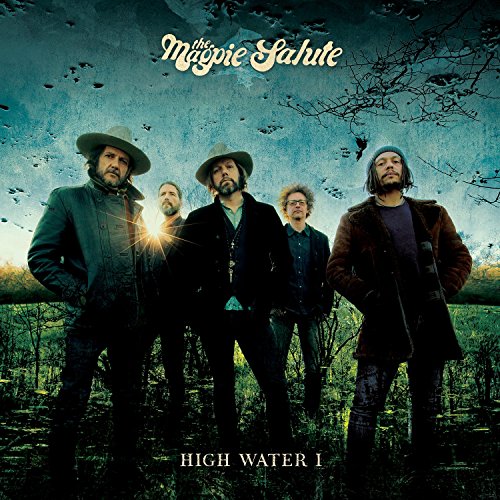 After the Black Crowes Robinson brothers major band splitting fallout, guitarist Rich Robinson pursued a lower key couple of solo offerings while brother Chris’ delved straight into his surging psychedelic southern rock Chris Robinson Brotherhood. But, in 2016 Rich assembled a ten-piece outfit, Magpie Salute, for a string of shows at Woodstock followed by four shows at New York’s Gramercy in 2017. The response was so good they went out on a world tour along with their whetting the appetite live debut consisting of Black Crowes numbers and covers. Now trimmed to a six piece, but still consisting of two fellow former Crowes – guitarist Marc Ford and bassist Sven Pipien – they release their first album of all new material in the shape of High Water I.

What transpires are a flow of immediate waves, the first is the Rich Robinson and Marc Ford guitar interplay which hits like a refreshing cool sea breeze in the middle of the hottest, energy sapping heatwave. Hearing rock rousing stompers ‘Mary the gypsy’, ‘Send me an Omen’, the swaggering ‘For the wind’, and ‘Can you see’, all filled with classic Crowes classy rock and groove power are extremely welcoming. Remember, this is the nearest we’re going to get to hearing the classic Black Crowes sound, and these songs don’t disappoint.