Posted by Green on April 30, 2021
in americana, rock
as The Long Ryders 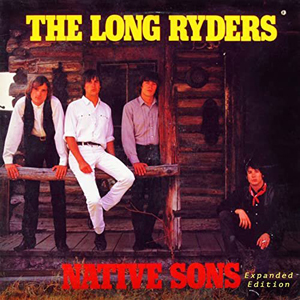 Native Sons was the first full-length album by the Long Ryders and the one that established their eclectic mixture of Byrds/Clash/Flying Burrito Brothers’ influences. The band recycled those influences, literally, going so far as to recreate the cover of an unreleased Buffalo Springfield album, Stampede, for Native Sons and using the producer of the first two Flying Burrito Brothers albums, Henry Lewy. Native Sons lovingly captures the band’s musical obsessions, while turning in an original sound that became the banner for both the paisley underground and cowpunk styles in the mid-’80s. Highlights include several forays into country on “Final Wild Son,” the Mel Tillis composition “Sweet Mental Revenge,” “Fair Game,” and the humorous “Never Got to Meet the Mom,” complete with a raging down-home banjo break. “Ivory Tower,” featuring the late ex-Byrd Gene Clark on vocals, remains the greatest song the Byrds never wrote and one of the most sincere tributes to that band’s sound. The album’s final track, “I Had a Dream,” reveals the punk sensibility, cranking the jangling Rickenbackers up to ten, closing with cacophonous feedback. On Native Sons, the Long Ryders pioneered a musical design that future alternative roots rockers would use as a manual.