Posted by Green on May 13, 2020
in alt-country, americana
as The Handsome Family 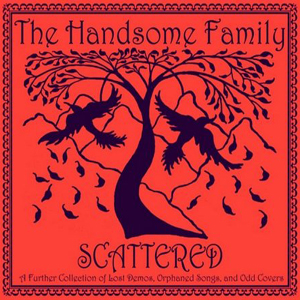 This is evident even on the song choices listed on the band’s recent compilation, Scattered: A Further Collection of Lost Demos, Orphaned Songs and Odd Covers. The sequel to Smothered and Covered features demos, outtakes, b-sides, and such performed in all their raggedy glory. This includes renditions of everything from classic rock (the Beatles’ “Eleanor Rigby”), folk rock (Bob Dylan’s “Just Like Tom Thumb’s Blues”), classic country (Hank Williams’ “Lost Highway”), traditional (“What Does the Deep Sea Say”), and originals (“Snowball”, “A Plague of Humans”) that clearly derive from older folk sources. The covers offer elegant recreations as if dressed in thrift store finery. Consider “Eleanor Rigby”, an overplayed oldie here given a fine bluegrass style accompaniment with Rennie Sparks softly singing of loneliness to husband Brett’s low harmonies. Joined by the Rivet Gang, the Handsome Family makes the song fresh and haunting, the way it sounded when first released by the fab four as a single. That’s not an easy thing to do.

While the covers of classic material stand out here, particularly Brett’s deliberate reading of Leonard Cohen’s “Famous Blue Raincoat” that breathlessly captures the joy and despair of being alone, that does not mean the band lacks a sense of humor, and a black one at that. The self-penned “Beer on the Roof” makes poetry out of the urban scenery (e.g., “the clouds kissed the smokestacks”) even as the dread of sober morning beckons. Brett’s ode to life after a stay in a mental hospital (“Tranquilized”) offers depression as an alternative to drugs. And his “Telephones and Telescopes” inadvertently reveals that one can spend too much time listening to R.E.M.

And as one might expect from such a compilation, there are sui generis gems that defy easy description. The instrumental “Honcho” belongs to that soundtracks to an imaginary western genre, and in this one, the good guy gets to go on another day. However, in the spooky Harlan Howard cover “Blizzard”, the good guy dies in the snowstorm because he won’t desert his horse. The spoken word narrative section’s instrumentation is as desolate as the person telling the story, in contrast to the band’s noisefest “Little Buddha”, where the electric guitars duel steel on steel drumming for who can be louder while the singer warbles about “nuclear war” and “TV screens”. Punk rock or old time country — the Handsome Family shows how the different genres are connected at the root. In the age of mechanical reproduction, we hear it all as new and hear all as part of everything else.

What sounds old, is for all intents and purposes old. Which is why the Handsome Family can take a song such as “Eleanor Rigby” and show how the Beatles’ tune is now part of our folk tradition, passed from generation to generation through phonographs, CDs, MP3s, whatever. The band knows we are all just lonely people. We are where we came from.

Self-released CD in a middlemounted six-panel black tray Digipak, only available at their concerts and from their website.

Track 1: Originally recorded for the Bloodshot Records’ 2005 compilation, For A Decade Of Sin.
Track 2: Supposed to be on Twilight.
Track 3: Recorded this for the 2005 compilation, Highway 61 Revisited Revisited released by Uncut Magazine.
Track 4: Originally released on Bloodshot’s 2002 children’s record, The Bottle Let Me Down.
Track 6: Written 1993. Taken from a cassette tape.
Track 7: Recorded for Revolver Reloaded, a 2006 compilation released by Mojo.
Track 8: Written for David Coulter’s “Plague Songs” that took place at London’s Barbican Centre in 2007.
Track 10: An alternative take of “The Red Leaf Forest”, a digital-only bonus track released with Honey Moon.
Track 11: Originally released as a 7″ single by Speed Kills in 1992. Recorded at Kingsize Studio.
Track 12: Recorded for a 2002 German compilation of Hank Williams songs.
Track 13: Recorded on 4-track.
Track 16: 1996.
Track 17: Final version released on Honey Moon.
Track 18: Early live recording made probably around 1992. Included on a cassette tape.