Posted by Green on November 9, 2018
in americana
as The Brother Brothers 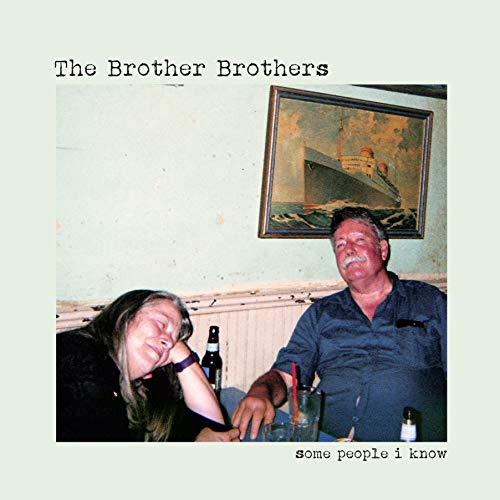 The Brother Brothers are American identical twins who have played music all their relatively short lives; they have individually gathered experience playing in various bands in various genres, not to mention picking up degrees in music along the way, and “Some People I Know” is their first collaborative album following on from an EP “Tugboats” last year.

The album is mainly self-written, each brother writing individually, and principally acoustic. It is melodic; features lots of nicely played acoustic guitar and fiddle and some beautiful harmony singing. It’s incredible how often siblings produce the most beautiful harmonies, “First Aid Kit” and “Everly Brothers” immediately spring to mind.

The opening song “Mary Ann” pretty much sets the scene for the rest of the album. It’s a lovely gentle song from the viewpoint of someone recovering from mental health issues and trying to get back on track. The arrangement of guitar, percussion, subtle keyboards and harmony serve as a cameo of things to come.

“Banjo Song” follows a similar theme, a song about a friend who has fallen out of love with music after an emotional upset. The banjo picking and fiddle playing are lovely and the singing, as always, is flawless. The cello makes an appearance for the first time which adds another ten points for me.

Chronicling the demise of a neighbourhood “Frankie” again features some great harmony singing, the arrangements highlighting the desperation as the local people are forced out of the area by wealthy incomers. A familiar sentiment shared on these shores.

Accompanied by gentle finger-picked electric guitar“I Will Be With You” opens to a harmony that is reminiscent of Simon and Garfunkel, a song of love lost to death or separation that has a religious certainty to being reunited one day.

By the fifth song in, the tone of the album is very definitely set. The writers draw their inspiration from the more melancholic side of life, and their music paints perfect pictures in the age-old folk tradition.

“Colorado” is a bit more upbeat musically. A song about life on the road, a homage to people they have met travelling. Fingerpicked electric guitar with a little bit of reverb invokes endless highways, and the refrain “ Boy Your Gonna Break Her Heart” the futility and loneliness of one night stands in no-name towns.

Eleven of the songs are fairly slow, lyrical tunes with the aforementioned beautiful harmonies and skilful arrangements. “In The Nighttime” explodes on the unsuspecting listener. An old-time style fiddle tune which certainly livens up the album displaying versatility in singing and fiddle styles.

Then comes my favourite:“Red and Gold”. Flawless finger picked guitar and close harmony throughout with a hint of electric slide. There are shades of Simon and Garfunkel in this one which can only be good.