Posted by Green on November 28, 2020
in Discography, roots rock, southerrn rock
as The Bottle Rockets 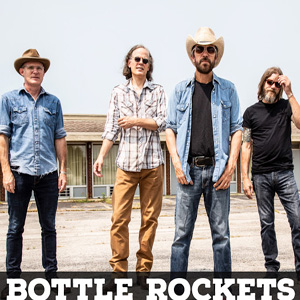 The Bottle Rockets is an American band formed in Festus, Missouri in 1992, and currently based in St. Louis, Missouri. Its founding members were Brian Henneman (guitar, vocals), Mark Ortmann (drums), Tom Parr (1992–2002, guitar, vocals) and Tom Ray (1992–1997, bass guitar); the current lineup consists of Henneman, Ortmann, John Horton (joined 2003, guitar)and Keith Voegele(joined 2005, bass, vocals). Most members of the group have contributed to their catalog of original songs, as have Robert Parr (Tom’s brother) and schoolteacher Scott Taylor (who writes lyrics for some of Henneman’s tunes).

As noted in the New York Times by William Hogeland, the Bottle Rockets’ songwriting has been likened to Woody Guthrie’s folk style in spirit, smarts, and satire. The band’s lyrics encapsulate the common experiences of the everyman, and are set to rousing and searing rock ‘n’ roll.The group has been named as one of the leaders of the ’90s alt-country/roots rock revival, alongside Uncle Tupelo. The strong social commentary of their songs reflects the influences of Woody Guthrie, Neil Young and The Replacements.