Posted by Thomas on October 23, 2021
in blues-rock
as The Black and Blues Band 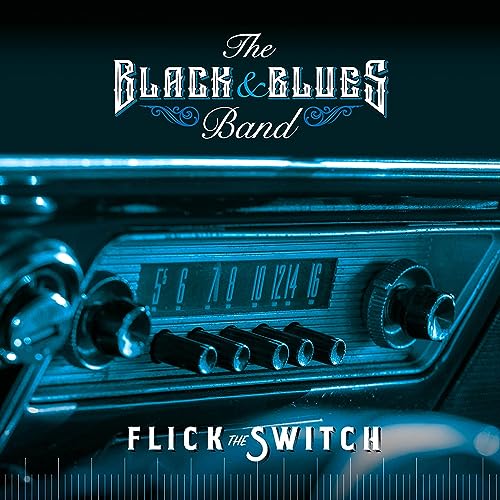 If ever a group were a ‘what it says on the tin’ outfit, The Black and Blues Band are it. True they are not black, but experienced white guys whose roots – and branches and leaves too, perhaps – are all firmly anchored in the blues. This is the blues of not just the Delta, Chicago, and elsewhere in the USA but also the blues of Ealing, Dartford and wherever else formed the British Blues Boom of the 60’s and beyond. No frills, no gimmicks, no fads, no fashions, just stompin’ good blues, in the finest traditions, played by an unpretentious and solid outfit, battle hardened by decades of experience on and off the road.

As lead singer Roger Keenan recalls ‘Music has always been an important part of my life. When I was growing up every pub had out of tune piano and people loved to sing along. I realised that if I could start the tune I not only earned money but became the centre of attention, and I liked both. I was hooked and joined the circus as soon as I could.

It was a circus that saw Roger rub shoulders and share stages with the likes of Thin Lizzy, Argent, Paul Carrack, Robert Plant, Andy Fairweather-Lowe and more. Together, of course, with more contemporary acts on today’s Blues circuit, as well as being part of the 80’s gig scene that contained the likes of Mark Knoffler and Ian Drury, amongst other household names. Basically Roger has seen it, done it and got the T shirt. A road warrior of the finest traditions, making accessible music for the people to which they could, more often than not, sing and dance to.

And it’s much the same story for his other three band mates, guitarist Clive, bassist Alan and drummer Gary all paid their dues and honed their craft through a range of musical endeavors, ranging from prog-rock to pop and most things in between, but bonded by a common love of the most universal music of the lot. The blues.

We’ll leave the last word with Roger ‘I never forget the communal joy that people get from singing together with complete strangers. Even today when we play an original set we always try to put something in that at least some people know, and can join in. The availability of music is so different from when I started, but the thrill of live music never changes, for the audience or the musician’.

Although formed with the primarily purpose of being a live unit, the inevitable happened and a debut album ‘A Lonely Road’ was released in 2020 and made it into the IBBA top 20, the chart confirming their position amongst the ‘most played’ artists across 100 plus radio stations, internationally. This has been quickly followed by the 2021 follow up, ‘A Flick of the Switch’ , which will further cement the bands position in the heart of the blues and roots community, and post-lockdown, the band look forward to doing what they enjoy best….hitting the stage!!