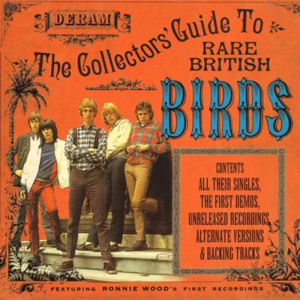 This is an astonishingly lively and exciting collection, coming from a band that scarcely sold any records in their own time and are known today for their name and their lineup, but not their music. The stuff here is as crunchy and grinding as the early Who material, and if the band’s own songwriting isn’t as distinctive, the style of the performing is more appealing. The songs range from some hot Ron Wood originals (“You’re on My Mind,” “Next in Line,” “That’s All I Need”) to covers of obscure Motown songs and Pete Townshend material. Think of the Kinks from “Long Tall Sally,” the Yardbirds from “A Certain Girl,” or the Who from “The Good’s Gone” and that’s the dominant sound here — curiously, their cover of Townshend’s “Run Run Run” starts out as though it’s going to turn into “My Generation.” Ali MacKenzie sounded like a punkier Roger Daltrey, and Ron Wood’s playing was a delightful compendium of rhythm fills and angular blues licks that must’ve been devastating on-stage. There’s also an unlisted bonus track on the CD — at the risk of spoiling the surprise, it’s their number from the 1966 horror film The Deadly Bees, which seems not to have survived as a formal, free-standing studio master.